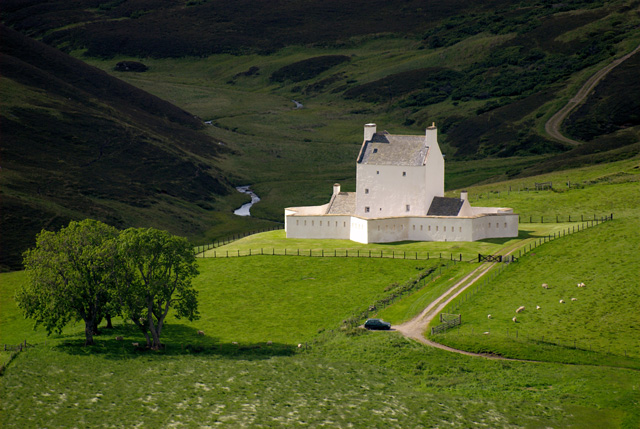 Location: Corgarff, Aberdeenshire, Scotland.
Built: c. 1550.
Condition: Preserved.
Ownership / Access: Historic Scotland.
Opening Times: Check their website for more info.
Price of Admission: Check their website for more info.
Notes: Corgarff Castle is located at Corgarff, in Aberdeenshire, north-east Scotland. It stands by the Lecht road, which crosses the pass between Strathdon and Tomintoul. The castle was built in the mid 16th century by the Forbes of Towie. In 1571 it was burned by their enemy, Adam Gordon of Auchindoun, resulting in the deaths of Lady Forbes, her children, and numerous others, and giving rise to the ballad Edom o Gordon. After the Jacobite risings of the 18th century, it was rebuilt as a barracks and a detachment of government troops were stationed there, on the military road from Braemar Castle to Fort George, Inverness. Military use continued as late as 1831, after which the tower served as a distillery and housed local workers. It remained part of the Delnadamph estate belonging to the Stockdale family until they passed the castle into state care in 1961 and gave the ownership of the castle to the Lonach Highland and Friendly Society. It is now in the care of Historic Scotland and is open to the public.

How To Get To Corgarff Castle (Map):