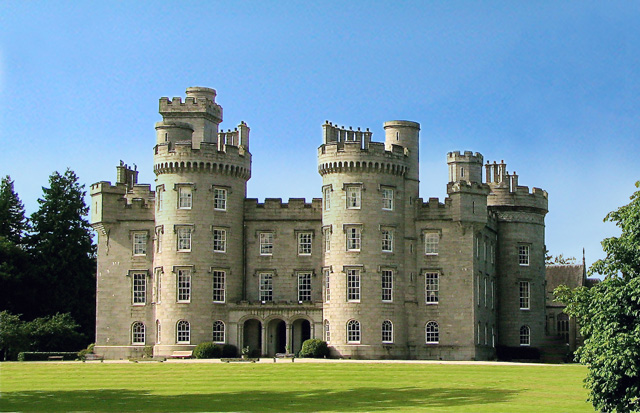 Location: South of Monymusk, Aberdeenshire, Scotland.
Built: c. 1604.
Condition: Intact. In use as a residence.
Ownership / Access: Linzee Gordon family.
Opening Times: Not open to the public but corporate events are hosted there and weddings are held in the chapel.
Price of Admission: Check their website for more info.
Notes: Cluny Castle was originally built c.1604 as a Z-plan castle replacing either a house or small peel tower. Sited in the parish of Cluny, it is south of Monymusk and north of Sauchen in Aberdeenshire, north-east Scotland. Owned by three separate branches of Gordon families over the centuries, it was used to shelter Jacobite rebels in the mid 18th century. Extensive additions were made in 1820 to the design of architect John Smith when it was in the ownership of Colonel John Gordon. Two wings of the castle and the adjoining private chapel were destroyed by fire in 1926 but the damage was restored. It is a Category A listed building and has been used as a film setting. The grounds are included on the Inventory of Gardens and Designed Landscapes in Scotland.

How To Get To Cluny Castle (Map):