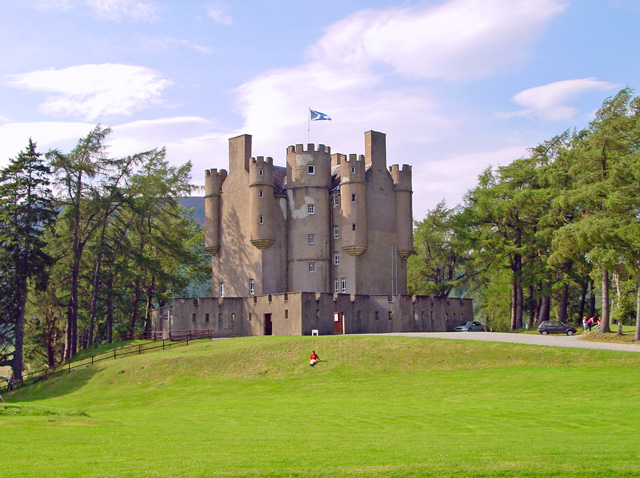 Location: Braemar, Aberdeenshire, Scotland.
Built: 17th century.
Condition: Preserved.
Ownership / Access: Owned by the Farquharsons of Invercauld and managed by Braemar Community Ltd.
Opening Times: Check their website for more info.
Price of Admission: Check their website for more info.
Notes: Braemar Castle is situated near the village of Braemar in Aberdeenshire, Scotland. It is a possession of the chief of Clan Farquharson and is leased to a local charitable foundation. It is open to the public. From the Late Middle Ages the castle was a stronghold of the Earls of Mar. The present Braemar Castle was constructed in 1628 by John Erskine, 18th Earl of Mar as a hunting lodge and to counter the rising power of the Farquharsons,replacing an older building, which was the successor of nearby Kindrochit Castle, which dates from as the 11th century AD. The siting of Kindrochit Castle was based upon the strategic location of this site relative to historic crossings of the Grampian Mounth.Since 2006 the castle has been leased to the local community. It is run on behalf of the community by local charity, Braemar Community Ltd and staffed by local volunteers, and an ambitious restoration programme has been started. It reopened to the public in 2008.The castle is reputedly haunted by several ghosts. Sightings have been reported of a young woman who was honeymooning in the castle. On waking one morning she found herself alone and, believing her husband had abandoned her, committed suicide. She usually appears to newlyweds. A piper has been seen in the back corridor, and a clash of steel can sometimes be heard on the staircase. The cries of a young baby, reputedly murdered in the castle, have also been reported. John Farquharson, the Black Colonel of Inverey has been seen in certain rooms. His outline on the four poster bed has been seen on numerous occasions, and the scent of his tobacco is said to linger in many of the rooms. Many of the ghosts are said to be depicted in Gustave Dore's 1873 painting of Braemar Castle, which previously hung in the Drawing Room.Among the antiques on display within the castle are a Bronze Age sword, and a piece of tartan plaid once worn by Bonnie Prince Charlie.

How To Get To Braemar Castle (Map):