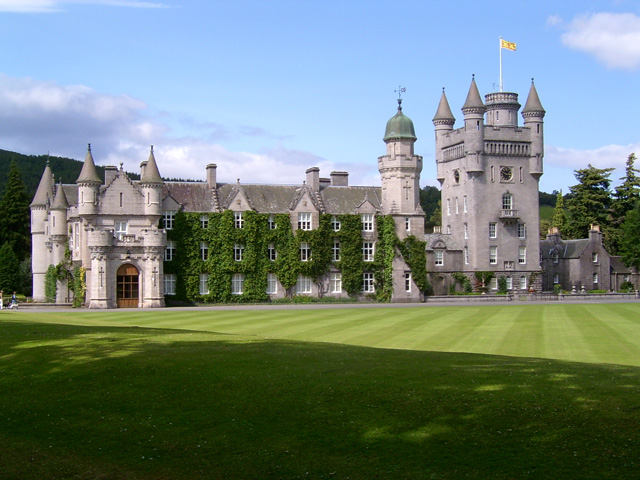 Location: Royal Deeside, Aberdeenshire, Scotland.
Built: 1856.
Condition: Intact. In use as a residence.
Ownership / Access: Private residence of The Queen.
Opening Times: Open daily between April and the end of July.
Price of Admission: Check their website for more info.
Notes: Balmoral Castle is a large estate house in Royal Deeside, Aberdeenshire, Scotland. It is located near the village of Crathie, 6.2 miles (10.0 km) west of Ballater and 6.8 miles (10.9 km) east of Braemar. Balmoral has been one of the residences for members of the British Royal Family since 1852, when the estate and its original castle were purchased privately by Prince Albert, consort to Queen Victoria. They remain as the private property of the royal family and are not the property of the Crown. Soon after the estate was purchased by the royal family, the existing house was found to be too small and the current Balmoral Castle was commissioned. The architect was William Smith of Aberdeen, although his designs were amended by Prince Albert. The castle is an example of Scots Baronial architecture, and is classified by Historic Scotland as a category A listed building. The new castle was completed in 1856 and the old castle demolished shortly thereafter. The Balmoral Estate has been added to by successive members of the royal family, and now covers an area of approximately 50,000 acres (20,000 ha). It is a working estate, including grouse moors, forestry, and farmland, as well as managed herds of deer, Highland cattle, and ponies. King Robert II of Scotland (1316-1390) had a hunting lodge in the area. Historical records also indicate that a house at Balmoral was built by Sir William Drummond in 1390. The estate is recorded in 1451 as "Bouchmorale", and later was tenanted by Alexander Gordon, second son of the 1st Earl of Huntly. A tower house was built on the estate by the Gordons. Tower houses often are referred to as castles because of their formidable construction. In 1662 the estate passed to Charles Farquharson of Inverey, brother of John Farquharson, the "Black Colonel". The Farquharsons were Jacobite sympathisers, and James Farquharson of Balmoral was involved in both the 1715 and 1745 rebellions. He was wounded at the Battle of Falkirk in 1746. The Farquharson estates were forfeit, and passed to the Farquharsons of Auchendryne. In 1798, James Duff, 2nd Earl Fife, acquired Balmoral and leased the castle. Sir Robert Gordon, a younger brother of the 4th Earl of Aberdeen, acquired the lease in 1830. He made major alterations to the original castle at Balmoral, including baronial-style extensions that were designed by John Smith of Aberdeen.Balmoral is a private property and, unlike the monarch's official residences, is not the property of the Crown. It originally was purchased personally by Prince Albert, rather than the queen, meaning that no revenues from the estate go to Parliament or to the public purse, as otherwise in accord with the Civil List Act 1760 would be the case for property owned outright by the monarch. Along with Sandringham House in Norfolk, ownership of Balmoral was inherited by Edward VIII on his accession in 1936. When he abdicated later the same year, however, he retained ownership of them. A financial settlement was devised, under which Balmoral and Sandringham were purchased by Edward's brother and successor to the Crown, George VI. Currently, the estate is still owned outright by the monarch, but, by Trustees under Deeds of Nomination and Appointment, it is managed by a trust. In 1931, the castle gardens were opened to the public for the first time and they now are open daily between April and the end of July, after which Queen Elizabeth arrives for her annual stay. The ballroom is the only room in the castle that may be viewed by the public.

How To Get To Balmoral Castle (Map):