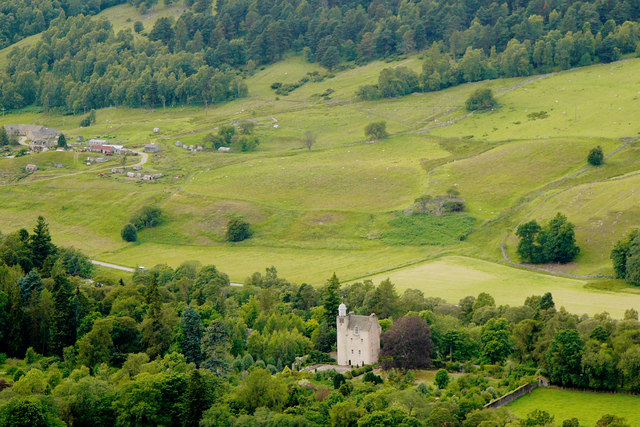 Location: Crathie, Aberdeenshire, Scotland.
Built: 1550.
Condition: Preserved.
Ownership / Access: Gordon family.
Notes: Abergeldie Castle is a four-floor tower house located near Crathie, Aberdeenshire, Scotland. It is protected as a category A listed building.The rectangular-plan tower measures around 35 by 28 feet (10.7 by 8.5 m), with a round stair tower 15 feet (4.6 m) across at the south-west corner. In the early 19th century an ogee-roofed belfry was built at the top of the stair tower, and a Venetian window inserted in the south facade. W. D. Simpson noted similarities between Abergeldie and the Castle of Balfluig at Alford, suggesting that they may have shared a designer.The castle is reportedly haunted by a ghost known as French Kate or Kitty Rankie. She is said to be a French woman who was employed in the castle at one time. After being suspected of witchcraft she was confined in the castle before being burned at the stake on a nearby hill.