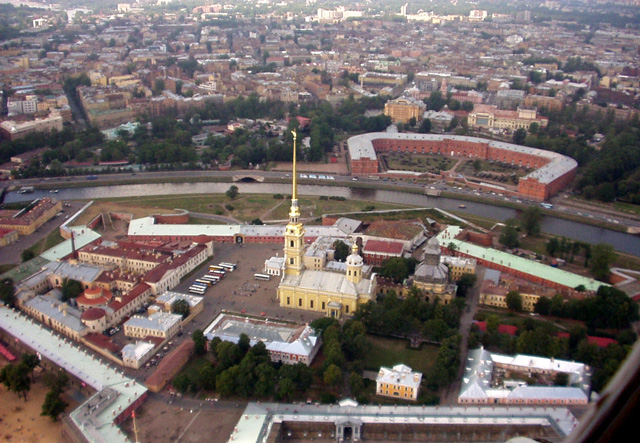 Location: St. Petersburg, Russia.
Built: 1703-1907.
Condition: Intact.
Ownership / Access: State Museum of Saint Petersburg History.
Opening Times: Check their website for more info.
Price of Admission: Check their website for more info.
Notes: The Peter and Paul Fortress is the original citadel of St. Petersburg, Russia, founded by Peter the Great in 1703 and built to Domenico Trezzini's designs from 1706-1740. In the early 20th century, it was still used as a prison by the tsarist government. Today it has been adapted as the central and most important part of the State Museum of Saint Petersburg History. The museum has gradually become virtually the sole owner of the fortress building, except the structure occupied by the Saint Petersburg Mint. The fortress was established by Peter the Great on May 16 (by the Julian Calendar, hereafter indicated using "(J)"; May 27 by the Gregorian Calendar) 1703 on small Hare Island by the north bank of the Neva River, the last upstream island of the Neva delta. Built at the height of the Northern War in order to protect the projected capital from a feared Swedish counterattack, the fort never fulfilled its martial purpose. The citadel was completed with six bastions in earth and timber within a year, and it was rebuilt in stone from 1706-1740. From around 1720, the fort served as a base for the city garrison and also as a prison for high-ranking or political prisoners. The Trubetskoy Bastion, rebuilt in the 1870s, became the main prison block. The first person to escape from the fortress prison was the anarchist Prince Peter Kropotkin in 1876. Other people incarcerated in the "Russian Bastille" include Shneur Zalman of Liadi, Tsarevich Alexei Petrovich, Artemy Volynsky, Tadeusz Kosciuszko, Alexander Radishchev, the Decembrists, Grigory Danilevsky, Fyodor Dostoevsky, Maxim Gorky, Mikhail Bakunin, Nikolai Chernyshevsky, Leon Trotsky and Josip Broz Tito.The fortress contains several notable buildings clustered around the Peter and Paul Cathedral (1712-1733), which has a 122.5 m (402 ft) bell-tower (the tallest in the city centre) and a gilded angel-topped cupola. The cathedral is the burial place of all Russian tsars from Peter I to Alexander III, with the exception of Peter II and Ivan VI. The remains of Nicholas II and his family and entourage were re-interred there, in the side St. Catherine's Chapel, on July 17, 1998, the 80th anniversary of their deaths. Toward the end of 2006, the remains of Dowager Empress Maria Feodorovna were brought from Roskilde Cathedral outside Copenhagen and reinterred next to her husband, Alexander III. The newer Grand Ducal Mausoleum (built in the Neo-Baroque style under Leon Benois's supervision in 1896-1908) is connected to the cathedral by a corridor. It was constructed in order to remove the remains of some of the non-reigning Romanovs from the cathedral, where there was scarcely any room for new burials. The mausoleum was expected to hold up to sixty tombs, but by the time of the Russian Revolution, there were thirteen. The latest burial was of Nicholas II's first cousin once removed, Grand Duke Vladimir Cyrilovich (1992). The remains of his parents, Grand Duke Cyril Vladimirovich and his wife Viktoria Fyodorovna, were transferred to the mausoleum from Coburg in 1995. Other structures inside the fortress include the still functioning mint building [1] (constructed to Antonio Porta's designs under Emperor Paul), the Trubetskoy Bastion with its grim prison cells, and the city museum. According to a centuries-old tradition, a cannon is fired each noon from the Naryshkin Bastion. Annual celebrations of the city day (May 27) are normally centered on the island where the city was born. The fortress walls overlook sandy beaches that have become among the most popular in St. Petersburg. In summer, the beach is often overcrowded, especially when a major sand festival takes place on the shore.

How To Get To Peter and Paul Fortress (Map):