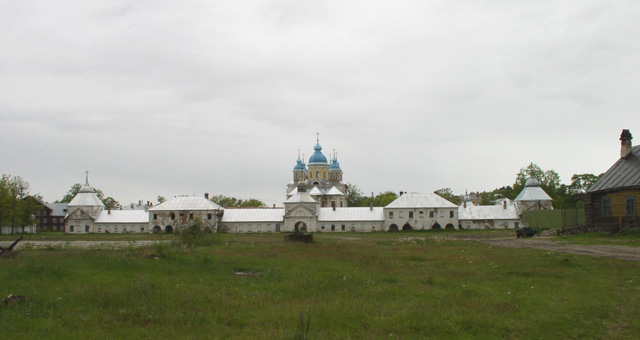 Location: Lake Ladoga, Leningrad Oblast, Russian Federation.
Built: 1393-1812.
Condition: Intact.
Ownership / Access: --
Notes: Konevsky Monastery is a Russian Orthodox monastery that occupies the Konevets Island in the western part of the Lake Ladoga, Leningrad Oblast, Russian Federation. It is often regarded as the twin monastery with the Valaam Monastery, also located on an island group in the same lake.After the Russian Revolution of 1917, the monastery passed to the newly independent Finland, and came under the jurisdiction of the autonomous Finnish Orthodox Church under the Ecumenical Patriarchate of Constantinople. The island was fortified by the Finnish military, and the inn was expropriated to house a regiment staff. During the Winter War and Continuation War the monastery buildings were damaged. On 13 March 1940 the Winter War ended. The previous day the monks had been evacuated to the interior of Finland, taking the holy icon with them, but leaving the iconostasis, church bells, and the library. Another personal possession of St. Arseny, the Konevsky Psalter, dated to the 14th century, was sent to the Russian National Library. In 1940, the monks bought an estate named Hiekka ('Sands') from the Saastamoinen company in Keitele, and the monastery continued to function there until 1956. The monks returned for a brief period during the Continuation War, but withdrew on 19 June 1944, ten days after the Soviet Union began the Offensive on the Karelian Isthmus, even though the Soviet troops never conquered the island or the adjacent shoreline on the isthmus. (These areas were ceded to the Soviet Union after the 1944 Moscow Armistice of September 19, 1944.) In 1956 the monks joined the New Valamo Monastery in Heinavesi. During the Soviet period, the monastery housed a military unit. In 1990 it became one of the first monasteries in the region to be revived by the Russian Orthodox Church. In November 1991, the brethren announced the discovery of St. Arseny's relics, that apparently had been hidden from the Swedes in 1573. By 2004, the Konevsky Monastery, which hosts a large number of tourists and pilgrims, had been mostly restored.