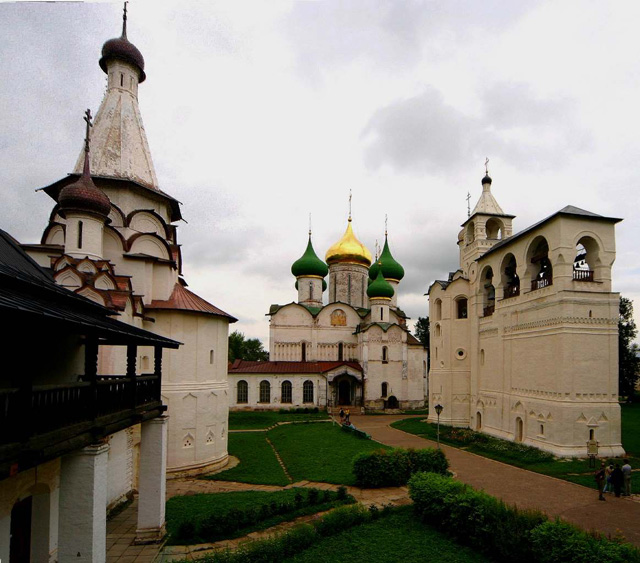 Location: Suzdal, Russia.
Built: 14th century.
Condition: Intact.
Ownership / Access: Now houses a museum.
Notes: The Saviour Monastery of St. Euthymius is a monastery in Suzdal, Russia. The monastery was founded in the 14th century, and grew in importance in the 16th and 17th centuries after donations by Vasili III, Ivan IV and the Pozharsky family, a noble dynasty of the region. Among the buildings erected during this period were the Assumption Church, the bell tower, the surrounding walls and towers, and the seven-domed Cathedral of the Transfiguration of the Saviour. The cathedral was built in the style of the Grand Duchy of Vladimir-Suzdal. Its interior contains restored frescoes by the school of Gury Nikitin of Kostroma, dating from 1689. The tomb of Dmitry Pozharsky lies by the cathedral wall. The monastery also contains a prison, built in 1764, which originally housed religious dissidents. The prison continued in use during the Soviet period, and among its better known prisoners was field marshal Friedrich Paulus, who was incarcerated here for a time after his surrender at Stalingrad. The prison now houses a museum about the monastery's military history.

How To Get To Monastery of Saint Euthymius (Map):