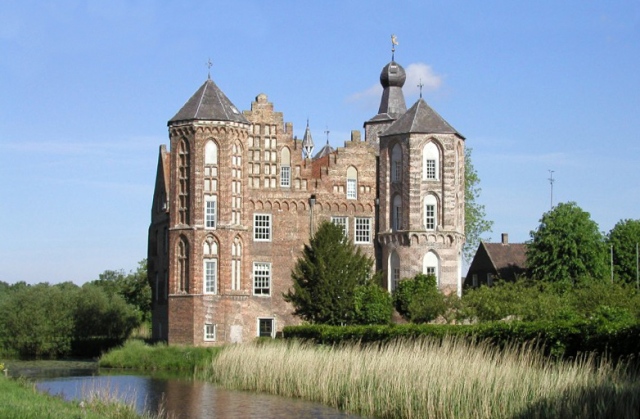 Location: Aarle-Rixtel, North Brabant, Netherlands.
Built: 15th century.
Condition: In good condition.
Ownership / Access: --
Notes: Croy Castle is a castle in the Dutch province North Brabant, near the village Aarle-Rixtel which is part of the municipality of Laarbeek. From 1642 until 1968 Croy belonged to the municipality Stiphout (currently part of the municipality of Helmond). The castle is currently no longer inhabited but in use as an office. Since 1795 beer is brewed near the castle. Since 2004 the Croy beer is itself had been brewed in Belgium but the ingredients are grown on the Croy estate. The destruction of the restaurant by fire in 2006 brought with it the opportunity to restore the tradition of brewing beer on the Croy estate. With the renovation of the nearby restaurant "de Croyse Hoeve" the microbrewery was built and with it the production has returned to Aarle-Rixtel. Due to environmental restrictions the beer is still bottled and packaged in Belgium. Also there is a herd of Rambouillet-Merino sheep on the Croy estate.

How To Get To Croy Castle (Map):