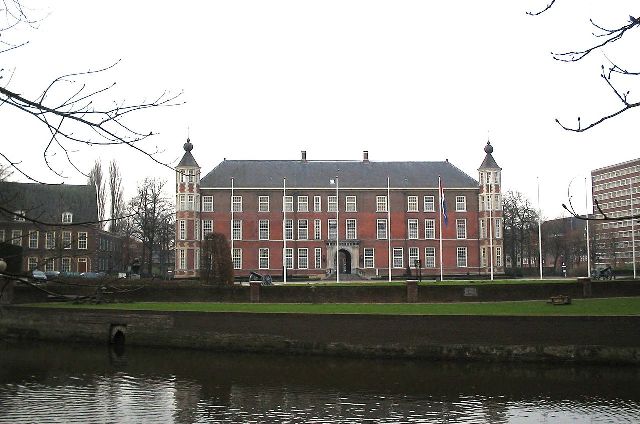 Location: Breda, North Brabant, Netherlands.
Built: 15th century.
Condition: In good condition.
Ownership / Access: Government.
Notes: Breda Castle is a castle in the city of Breda, in the Netherlands.In the 12th century, a fortress was located at Breda. The city of Breda came into existence near the fortress. In 1353, the Duke of Brabant sold Breda to Jan II of Polanen (Baron of Breda). He reinforced the castle with four towers and a channel. His daughter Johanna of Polanen married in 1403 the German count Engelbert I of Nassau. Their son Jan IV of Nassau enlarged the castle. Henry III of Nassau-Breda changed the castle into a Renaissance palace in 1536. He died in 1538 and his son René of Châlon finished the castle and built a chapel in 1540. René of Châlon died without any children and the castle became property of his German cousin, William I of Orange, during his battle with the Spanish, it had a military function again (Dutch revolt). In 1667 the Treaty of Breda was signed by England, France and the Republic of the Seven United Netherlands. This ended the second English-Dutch war. Stadtholder - King William III of England built on the castle between 1686 and 1695. But he and his successors did not stay much at the castle. In the France time (18th century), the castle was a military barracks and military hospital. William I of the Netherlands placed at disposal of the Royal Military Academy in 1826. In this time, Thomas Vincidor built three wings and later William II built the fourth wing. The entrance gate is from the 16th century.

How To Get To Breda Castle (Map):