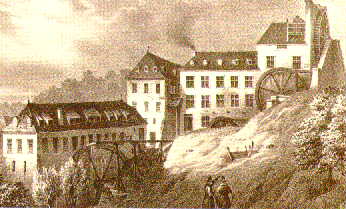 Location: Near Niederanven, Luxembourg.
Built: 1750.
Condition: Intact.
Ownership / Access: Governmental conference centre
Notes: Senningen Castle is located to the west of Niederanven some 11 km (7 mi) from Luxembourg City in the Grand Duchy of Luxembourg. Today it is used by the State for official meetings. In the 17th century Alexandre Wiltheim, from one of Luxembourg's most notable families, operated watermills for flour and for oil on the site. They were driven by the fast-flowing Senninger Brook. During the 18th century, under the ownership of the French immigrant Pierre Bourgeois, the facilities were converted into a paper mill. After a fire in 1750, the mill was renovated and a residence was constructed nearby. Paper production reached its height in the middle of the 19th century when Jacques Lamort managed the mill. However, as a result of economic problems, the mill was finally closed in 1882. The same year, the site was bought by Ernest Derveaux who demolished the mill and transformed the owner's residence into the castle with neo-gothic wings which stands there today. Derveaux also added a lake with a fountain and laid out the surrounding park with ornamental plants and trees.The castle is used by the State of Luxembourg for official meetings. It is not open to the public.