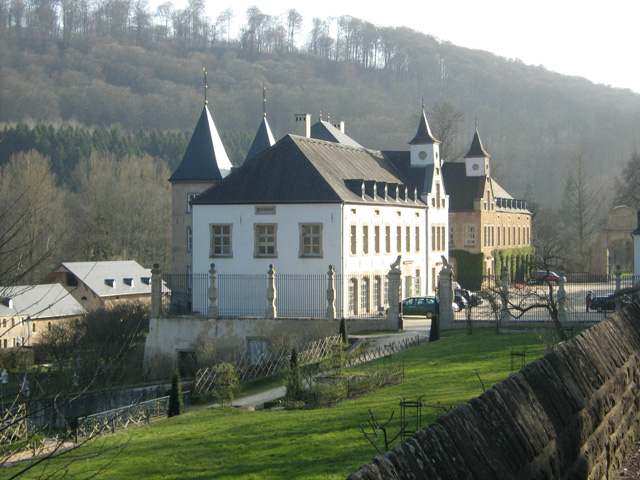 Location: Ansembourg, Luxembourg.
Built: 1639.
Condition: Privately owned, renovated, gardens open to the public.
Ownership / Access: Sukyo Mahikari.
Opening Times: Open to visitors from 9 am every day.
Price of Admission: Check their website for more info.
Notes: The New Castle of Ansembourg (French: Grand Chateau d'Ansembourg), in central Luxembourg is one of the castles belonging to the Valley of the Seven Castles. Located about one kilometre or just over half a mile below the Old Castle of Ansembourg, it was built by the industrialist Thomas Bidart in 1639. In 1639, Thomas Bidart built the central part of today's castle as a comfortable house surrounded by walls and towers, two of which still stand. Originally from Liege in Belgium, Bidart, who was a pioneer of Luxembourg's iron and steel industry, named the building Maison des Forges (House of the Ironworks). During the Thirty Years' War, he tapped the region's many water sources and exploited its timber and iron, manufacturing arms at a foundry close to the old castle. As a result, his family prospered, earning rights to the title of Lords of Amsembourg which had belonged to the Raville family until 1671. It was the de Marchant family who, after inheriting the property by marriage, undertook its astonishing transformation into today's modern-looking castle. In 1719, the courtyard was extended with two wings on either side of the original building. The southern gable was enhanced with a magnificent arch where four statues represent the four continents. Fitted with two small towers, the new facade overlooked the gardens which were connected to the castle through an arcade. The first-floor balcony above the porch provided an excellent view of the gardens, complete with flowerbeds and a fountain. Between 1740 and 1750, Lambert Joseph de Marchant et d'Ansembourg further improved the gardens and extended the buildings on the north side of the main courtyard so that they could be used as stables and lodgings for the castle staff. In 1759, Count Lambert Joseph added the impressive Baroque gateway bearing the arms of de Marchant of Ansembourg and Velbruck.Since 1987, the castle has belonged to Sukyo Mahikari who has undertaken substantial renovation work with the assistance of Luxembourg's Service des Sites et Monuments nationaux. Initially work was centred on reinforcing the foundations and walls and on restoring the staircase of honour on the upper terrace in the gardens. From 1999, the statues and the fountains in the garden were repaired while the roofs over the two wings and the central section were rebuilt. Work is now concentrated on restoring the oldest part of the building which dates from the 17th century. The castle gardens are open to visitors from 9 am every day. The castle also hosts a number of cultural events during the year.

How To Get To New Castle of Ansembourg (Map):