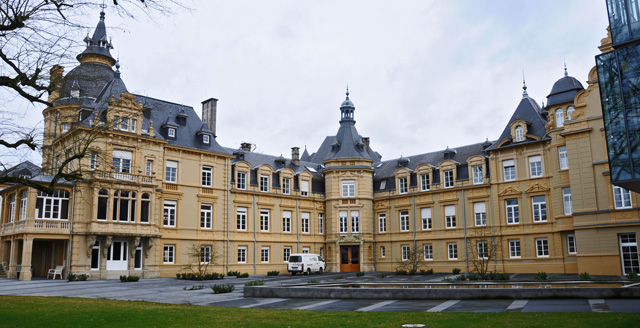 Location: Heisdorf, Luxembourg.
Built: 19th century.
Condition: Intact.
Ownership / Access: Old people's home.
Notes: Heisdorf Castle located in the village of Heisdorf in central Luxembourg was built by Baron Lippmann in the late 19th century. Surrounded by a large park, it was designed by the Belgian architect Charles Thirion. In 1916, the Sisters of the Christian Doctrine acquired the property as a convalescent home for their community. In 1982, it was opened as an old people's home under the name of Maison de retraite Marie-Consolatrice. In 2007, a new wing was added to the building by the architecture firm Hermann, Valentiny and Partners providing improved facilities for its senior citizens.The castle grounds include a large park, along the main road, from which it is separated by a high wall. The park was renovated after 1910, which left the old trees standing. Two of these, a black pine and an oak tree, are counted among the "notable trees" of Luxembourg.