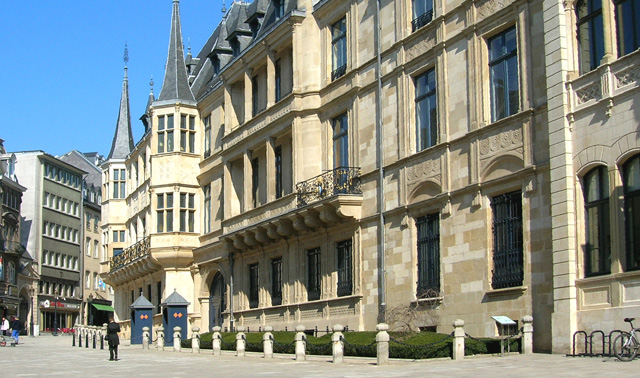 Location: Luxembourg City, Luxembourg.
Built: 1572.
Condition: Intact.
Ownership / Access: Grand-ducal residence.
Notes: The Grand Ducal Palace is a palace in Luxembourg City, in southern Luxembourg. It is the official residence of the Grand Duke of Luxembourg, and where he performs most of his duties as head of state of the Grand Duchy. The building was first the city hall of Luxembourg from 1572 to 1795, the seat of the prefecture of the D�partement des For�ts in 1795, and then the headquarters of the Luxembourg Government in 1817. From 1817, the palace became the residence of the Governor, the representative of the Dutch Grand Dukes. As such, it was used by Prince Henry, during his time as Lieutenant-Representative of Luxembourg. The building's interior was renovated in 1883, in preparation of a visit by Grand Duke William III and his wife, Grand Duchess Emma. With the accession of the House of Nassau-Weilburg in 1890, the palace was reserved exclusively for the Grand Duke and his family. Under Grand Duke Adolphe, it was comprehensively renovated and a new wing, containing family rooms and guest accommodation, was built by the Belgian architect Gedeon Bordiau and the Luxembourgian state architect, Charles Arendt. During the German occupation in the Second World War, the Grand Ducal Palace was used by the Nazis as a concert hall and tavern. Extensive damage was done and much of the palace's furniture and art collections was ruined. With the return of Grand Duchess Charlotte from exile in 1945, the palace once again became the seat of the Grand Ducal Court. Under the supervision of Charlotte, the palace was redecorated during the 1960s. It was thoroughly restored between 1991 and 1996. The interior of the Palace has been regularly renovated to match modern tastes and standards of comfort. From 1945 to 1966 the Grand Ducal Guard mounted ceremonial guard duties at the palace. From 1966 to today soldiers of the military of Luxembourg perform guard duties.As the official residence of the Grand Duke, the palace is used by him in the exercise of his official functions. He and the Grand Duchess, together with their staff, have their offices at the palace, and the state rooms on the first floor are used for a variety of meetings and audiences. On Christmas Eve, the Grand Duke's Christmas message is broadcast from the Yellow Room. Foreign heads of state are accommodated at the palace, as guests of the Grand Duke and Grand Duchess, during official visits to Luxembourg, and the Ballroom is the setting for state banquets in their honour. Throughout the year, numerous other receptions take place at the palace, such as the New Year's reception given for members of the Government and the Chamber of Deputies.

How To Get To Grand Ducal Palace (Map):