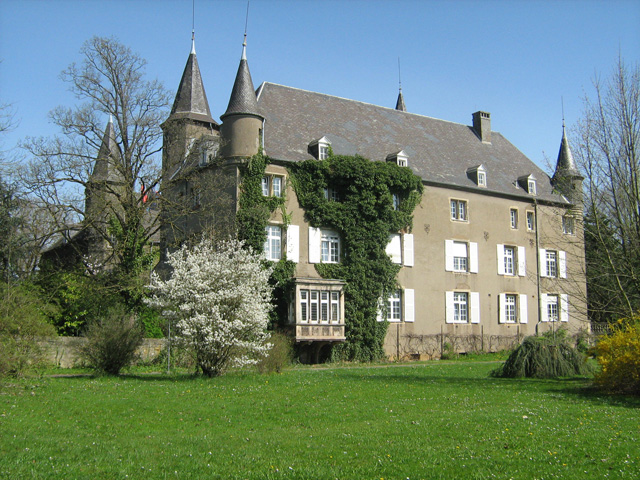 Location: Differdange, Luxembourg.
Built: 1577.
Condition: Intact.
Ownership / Access: Miami University.
Notes: Differdange Castle, located on a hill in the centre of Differdange in southern Luxembourg, was built in 1577 although an earlier fortified castle of Differdange dates from around 1310. Today's residential ch�teau is used by Miami University. The first lord of Differdange Castle was Wilhelm, brother of the Lord of Soleuvre, who is mentioned in documents from 1310 when he owned a fortified castle. However, the lords of Differdange lasted only until the death of Wilhelm's grandson around the year 1400. When Soleuvre Castle burnt down in 1552, the owner Anna von Insenburg decided not to repair it but to build a Renaissance-style residential castle in Differdange serving both Soleuvre and Differdange. At the beginning of the 20th century, the castle came into the hands of the local steel industry, now Arcelor Mittal who used it as a hotel and a restaurant for its staff.Since 1997, the castle has been let to Miami University for use as its Miami University Dolibois European Center, a European teaching centre providing students with "a living history for their European experience". The center is named in honour of former American Ambassador to Luxembourg, John E. Dolibois.

How To Get To Differdange Castle (Map):