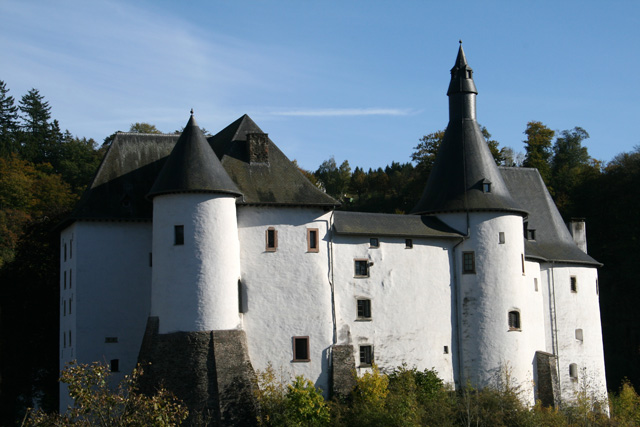 Location: Clervaux, Luxembourg.
Built: 12th century.
Condition: Fully restored, open to visitors.
Opening Times: Open to visitors every day except Mondays from 10 am to 6 pm. It is closed in January and February.
Price of Admission: Check their website for more info.
Ownership / Access: The castle is now used partly as a museum and partly for housing the local administration.
Notes: The oldest parts of the castle from the 12th century were built by Gerard, Count of Sponheim, a brother of the Count of Vianden. The large palace and the rounded towers are probably from around 1400 when the prosperous Lords of Brandenbourg lived there. In 1634, Claude of Lannoy built the reception halls, including the large Knights' Hall in the Spanish style of Flanders. In 1660, stables, storerooms and administrative buildings were added. Finally, in the 18th century, new stables were built. Over the years, like other castles in Luxembourg, Clervaux fell into disrepair although it was partly restored and used as a hotel before it was finally destroyed in the Second World War during the Battle of Clervaux (December 16 to 18, 1944), part of the Battle of the Bulge.After being fully restored after the war, the castle is now used partly as a museum and partly for housing the local administration. The south wing houses an exhibition of models of Luxembourg's castles, the old kitchen in the Brandenbourg House is a museum devoted to the Battle of the Ardennes while the upper floor house display photographs by Edward Steichen in an exhibition entitled The Family of Man. The remaining rooms are used for the services of the local administration.

How To Get To Clervaux Castle (Map):