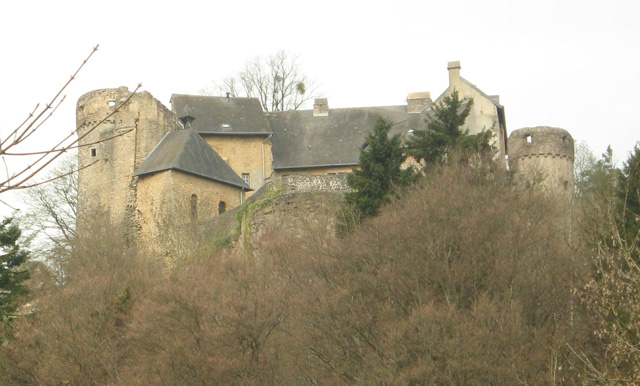 Location: Ansembourg, Luxembourg.
Built: 1135.
Condition: Private residence of the current Count and Countess of Ansembourg.
Ownership / Access: Gaston-Gaetan Count de Marchant et d'Ansembourg.
Notes: Ansembourg Old Castle, known as the Old Castle of Ansembourg, in central Luxembourg is one of the castles belonging to the Valley of the Seven Castles. Located high above the little village of Ansembourg, the medieval castle is the private residence of the current Count and Countess of Ansembourg.Today the castle is owned by Gaston-Gaetan Count de Marchant et d'Ansembourg who moved into the property after the death of his father. At the end of 2008, the Luxembourg government acquired the family's library (around 6000 books) and were offered the family archives. Interest had grown in the collection after the Codex Mariendalensis manuscript telling the story of Yolanda of Vianden was found in 1999 by the linguist Guy Berg. The manuscript dating from the end of the 14th or beginning of the 15th century was especially significant as it was written in the Moselle Franconian dialect which is closely related to modern Luxembourgish.The castle is strictly private property and is not open to visitors. Recently, the Count of Ansembourg opened a very exclusive boutique hotel, in one of the buildings surrounding the castle.