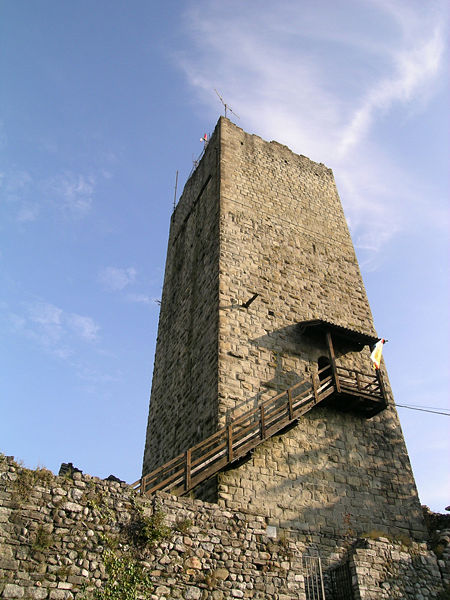 Location: Como, Italy.
Built: 12th century.
Condition: Ruined.
Ownership / Access: --
Notes: The Castello Baradello is a military fortification located on a 430 m (1,410 ft) high hill next to the city of Como, northern Italy.The castle occupies the ancient site of Comum Oppidum, the original settlement of Como, dating from the 1st millennium BC. Later it was one of the last Byzantine strongholds in the area, surrendering to the Lombards in 588. The castle was restored during the War of the Lombard League, with the help of emperor Frederick Barbarossa (1158). Barbarossa officially donated it to the citizens of Como in 1178. Napoleone della Torre died here in 1278, having been imprisoned here by Ottone Visconti after the Battle of Desio; his nephew Guido was able to escape in 1283, as well as his brothers Corrado and Enrico the following year. Azzone Visconti restored and enlarged the fortification after conquering Como in 1335, and built another castle, the Castello della Torre Rotonda ("Castle of the Round Tower", now lost) and a citadel. In 1527, by order of emperor Charles V, the castle was dismantled, with the exception of the tower, to prevent it from falling in hands of the French troops that had invaded the duchy of Milan. After belonging to monks and then to private individuals, the castle was restored in 1971.

How To Get To Castello Baradello (Map):