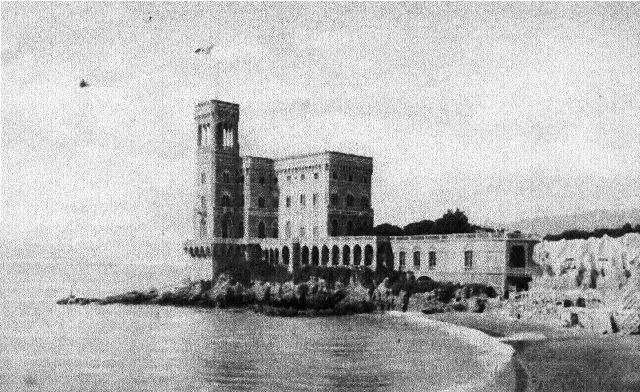 Location: Genoa, Italy.
Built: 18th century.
Condition: Demolished.
Ownership / Access: --
Notes: The Castello Raggio of Genoa was one of the historic buildings of Genoa. Located in the district of Cornigliano, the manor, already heavily damaged by the bombings of World War II, he was shot down April 14, 1951 to make way for the steel inauguration "Oscar Sinigaglia" Italsider and the International Airport "Cristoforo Colombo" inaugurated ten years later.The promontory on which the castle stood, said of St. Andrew, was home to a religious community, initially dedicated to the worship of Benedict of Nursia, whose first traces date back to the Middle Ages. In 1131 the monks changed their compliance, entering the Cistercian Order and a few years later, moved the seat of the monastery in the hills behind, in a slightly elevated position, building the Badia di Sant'Andrea. In the abbey and worked in the church and lived during the twelfth century, St. Albert from Genoa. In 1797 the two buildings, with the end of the republic and the birth of pro-revolutionary Republic Ligure, were expropriated, like many other religious properties in the region. The abbey was bought by Duke Vivaldi Easter, who transformed it into a stately villa, preserving in its original Gothic structures, while the church which was located on the headland was first used as a powder magazine and later (1860-1881) as the site of a detachment of the Royal Navy. In 1881 the area was acquired by Radius family.