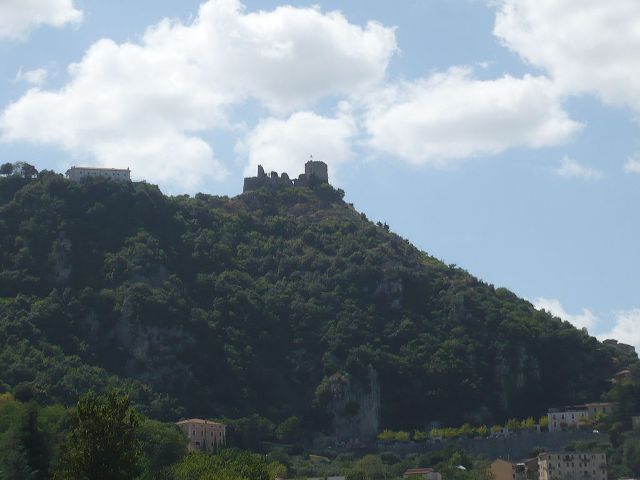 Location: Esperia, Italy.
Built: around 1103.
Condition: Mostly in ruins.
Ownership / Access: State property.
Notes: Roccaguglielma is the medieval fortress that dominates the village of the municipality of Esperia, as well as the historical name of the capital city, today also called Esperia superiore.. Roccaguglielma is located on Mount Cecubo, the top of a rocky ridge. The fort is 500 m s.l.m. overhanging over the area from which it is accessible. The area, which is open to visitors, is the property of the state. It was built around 1103 probably where they lay the oldest structures at the behest of the Norman William of Blosseville (often transcribed Glossavilla). He also founded the town at the foot of the castle, defended by a ring of walls reinforced by 12 towers with three ports (Caporave, with the Holy Spirit and St. Boniface); the village also had an inner wall, also with three doors (Portella, Santa Croce and Morrone). Currently the fortifications are mostly in ruins. The castle was placed so as to control the mountain pass that connects directly Pontecorvo and Aquino Gaeta, bypassing the non Norman territory of Montecassino. Allied with the castles of Campello, Pico, and St. John Rivomatrice Assignment formed for some decades a small independent potentate said the five Castles de Foris, surrounded by cassinesi territories.

How To Get To Roccaguglielma (Map):