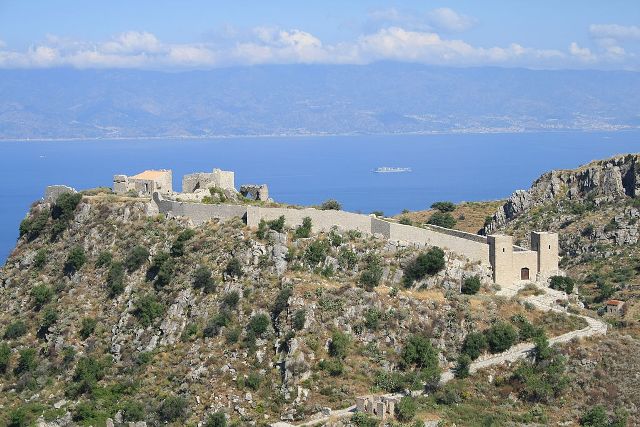 Location: Motta San Giovanni, Italy.
Built: 11th century.
Condition: Ruined.
Ownership / Access: --
Notes: The Castle of Sant'Aniceto (also San Niceto) is a Byzantine castle built in the early 11th century on a hill in Motta San Giovanni, now in the province of Reggio Calabria, southern Italy. It is one of the few examples of High Middle Ages architecture in Calabria, as well as one of the few well-preserved Byzantine fortifications in the world. The name derives from that of St. Nicetas, a Byzantine admiral who lived in the 7th-8th centuries.The castle was built as a refuge and a warning place during a period in which the ravages of Saracen pirates on the Calabrian and Sicilian coasts were frequent. When the Normans conquered southern Italy, the structure was enlarged, with the addition of rectangular towers. In the 13th century the castle became the command center of the flourishing fief of Sant'Aniceto (which included Motta San Giovanni and Montebello). Two centuries later, entered in conflict with Reggio Calabria, and in 1459 it was destroyed by Alfonso of Calabria.

How To Get To Castle of Sant'Aniceto (Map):

Castle of Sant'Aniceto On Wikipedia