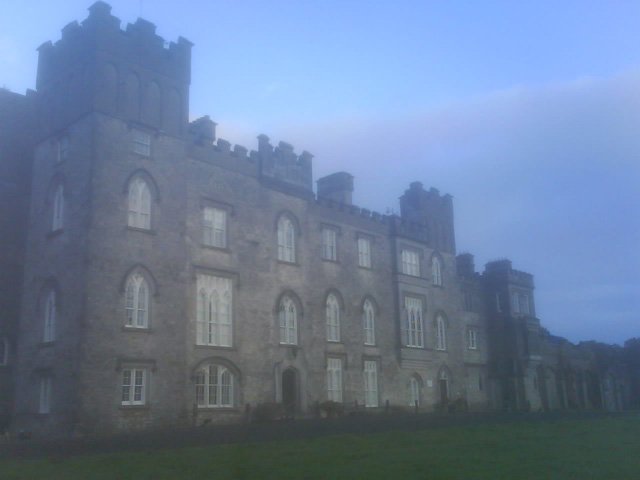 Location: Dunsany, County Meath, Ireland.
Built: c. 1180 / 1181.
Condition: Intact.
Ownership / Access: --
Opening times: Check their website for more info.
Price of admission: Check their website for more info.
Notes: Dunsany Castle, Dunsany, County Meath, Ireland is a modernised Norman castle, started c. 1180 / 1181 by Hugh de Lacy, who also commissioned Killeen Castle, nearby, and the famous Trim Castle. It is possibly Ireland's oldest home in continuous occupation, having been held by the Cusack family and their descendants by marriage, the Plunketts, to the present day. The castle is surrounded by its demesne, the inner part of the formerly extensive Dunsany estate. The demesne holds an historic church (still consecrated), a working walled garden, a walled farm complex, an ice house, various dwellings and other features. The castle was built, probably in succession to basic "motte" fortifications, remnants of which can still be seen to the left and right in front of it, in the period 1180 - 1200, construction being thought to have begun in 1180 / 1181. Foundations and the lower parts of the four main towers are thought to be original, and some interior spaces, notably an old kitchen, but much additional work has been carried out, especially in the 18th and 19th centuries, and the current castle is more than three times the size of the original. The castle, along with Killeen Castle, was held by the Cusacks, initially on behalf of the de Lacys, and passed by marriage in the early 15th century to the Plunketts. Originally, it and Killeen lay on a single estate but the first generation of Plunketts gave Killeen to the eldest son, and Dunsany to the younger, Christopher, following which the estate was divided, and the Castle descended in the hands of the Barons of Dunsany, who enjoyed almost uninterrupted ownership, aside from issues around Oliver Cromwell's operations in Ireland (the then Lady Dunsany defended the castle against an initial approach but the family were later forced out, some dying on the way to Connaught), and the aftermath of some other troubles between Ireland and England. They were cousins of Saint Oliver Plunket. The Dunsany Estate was reduced by the operation of the Land Acts in the late 19th and early 20th century but the castle is still surrounded by its original demesne, and other estate lands remain around the district, some adjacent to the demesne and some remote. Much of the work of the writer Lord Dunsany was done at the Castle, notably in a room in one of the building's towers. Since the 1990s, work has been carried out, with some attendant publicity, to restore some of the Dunsany properties in the immediate area and in Trim. The family's other castle, the largest in Ireland but a ruin, Trim Castle, was transferred to the State in the 1990s. The Castle is entered through a projecting porch and a lobby with a worked plaster ceiling, which opens into the central hallway, featuring the principal stairway and a vaulted ceiling, and into a secondary hall. The ground floor holds the grand dining room, with portraits of past family members, and a fine arts and crafts billiards room, as well as kitchen spaces, ancient and modern, and other rooms. On the first floor are the library, and drawing-room, which has Stapleton plasterwork from 1780. The library, which may have been worked on by James Shiel, is in the "Gothic Revival" style, with a "beehive" ceiling. Also on this floor is a secondary stairway (where a "priest's hole" for hiding Catholic ministers formerly existed). The third floor holds ornate bedrooms.

How To Get To Dunsany Castle (Map):