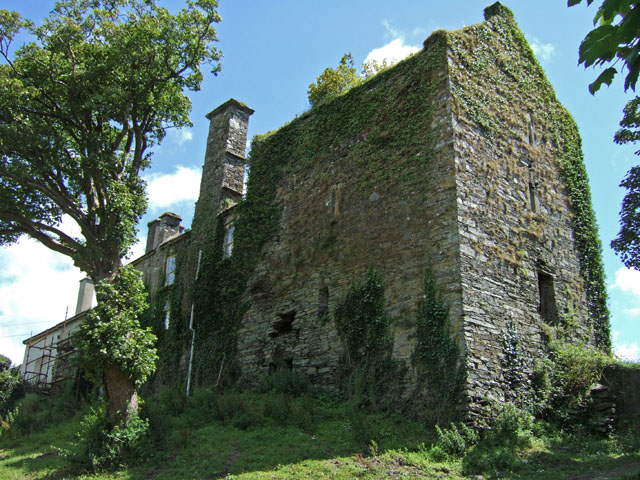 Location: Rosscarbery, in County Cork, Ireland.
Built: 1470.
Condition: Restored
Ownership / Access: Private. Now a working farm and offers bed and breakfast as well as tours.
Opening times: Check their website for more info.
Price of admission: Check their website for more info.
Notes: Castle Salem is a fortified house near Rosscarbery, in County Cork, Ireland. The house was home to the Morris family from around 1660 until the early 1800s, and was bought by the Daly family in 1895 - descendants of whom now run it as a guest house. According to a Charles Smith, who terms it 'a strong romantic building', Benduff Castle was built by the O'Donovans. However, it was almost certainly built around 1470 by Catherine Fitzgerald, daughter of Thomas 8th Earl of Desmond who married Finghin MacCarthy Reagh The Annals of the Four Masters says that she died in 1506. This Earl, one of the most powerful men in Ireland was Viceroy of Ireland under Edward IV., was executed at Drogheda, in 1466, having fallen a victim, it is said, to the malice of Edward's Queen, Elizabeth Grey, in consequence of his having made a disrespectful speech in reference to her to that King. Earl Thomas's daughter is probably the person who has come down to us as "The Black Lady," of whom various legends were told in connection with Benduff. The ancient Castle of Benduff (In Irish Bhinn Dubh 'The Black Peak'), now called Castle Salem (the castle is sometimes referred to as Castlesalem, Castle Sally & Mount Salem, is situated about a mile to the north-west of Rosscarbery, in the bosom of a secluded valley shut in by hills and at one time by a dense plantation of trees. It thus differed from the generality of the feudal strongholds of old which were either perched on a rocky eminence or surmounted the summit of some rising' ground. But the sheltered and isolated position of this castle probably protected it from external danger. Originally a strong structure, Benduff Castle was built in the usual style of the Norman fortresses which studded Ireland during the Middle Ages, distinguished for their square central keep or tower, with thick massive walls and loop holes for the use of arms as well as the admission of light, to which were generally attached side buildings furnished with bastions, and strong outer walls enclosing the entire foundation - these latter being sometimes provided with covered ways. Benduff Castle has three internal arches; its walls 11 feet thick, with passages and recesses, and the usual stone stairway. It was originally about 70 feet high till old William Morris took the top off, and put on it a slated roof. The Morris family still lived in the castle at the beginning of the 19th century. It was described in 1815 as the seat of William Morris. There was an 'old house joined to a castle of still greater antiquity, standing on a rock rising in the centre of a small romantic vale surrounded by steep and lofty hills. Of the trees that were formerly very abundant many still remain, amongst which are a yew and some beech of great size. A very singular circumstance occurs here of a rookery in a grove of laurels'. The Castle was offered for sale at the encumbered estates court on 3 June 1853 and was bought by a Dr. Fitzgibbon for £1,350. In 1870 it was in the hands of Mrs Eliza Fitzgibbon. Patrick Daly family bought the Castle in 1895 from the Fitzgibbons and 3 generations of the family have now farmed the land. Under the stewardship of Michael and Margaret Daly and their family the Castle tower has been partially restored. It is still a working farm and offers bed and breakfast as well as tours.

How To Get To Castle Salem (Map):