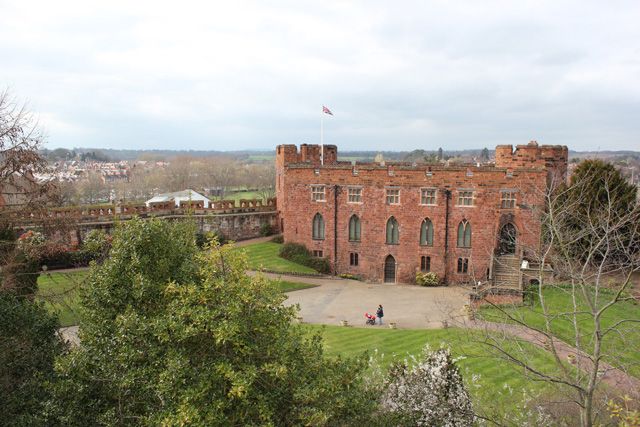 Location: Shrewsbury, Shropshire, England.
Built: 12th century.
Condition: Rebuilt.
Ownership / Access: Shropshire Council. Museum.
Opening times: Check their website for more info.
Price of admission: Check their website for more info.
Notes: Shrewsbury Castle is a red sandstone castle in Shrewsbury, Shropshire, England. It stands on a hill in the neck of the meander of the River Severn on which the town originally developed. The castle is situated directly above Shrewsbury railway station and is a Grade I listed building. It was built as a defensive fortification for the town, which was otherwise protected by the river. Town walls, of which little now remains, then radiated out from the castle and surrounded the town (although the area known now as Town Walls still has a small section of it and a tower known as Town Walls Tower and in the care of the National Trust). In 1138, King Stephen successfully besieged the castle held by William FitzAlan for the Empress Maud during the period known as The Anarchy. The castle was also briefly held by Llywelyn ap Iorwerth, prince of Wales, in 1215. Little of this original physical structure remains. Since 1985, the castle has housed the Shropshire Regimental Museum, with artefacts from the King's Shropshire Light Infantry. The museum combines the collections of the 53rd, the 85th, the KSLI to 1968, the local Militia, Rifle Volunteers and Territorials, as well as those of other county regiments - the Shropshire Yeomanry and the Shropshire Artillery Volunteers and the Shropshire Royal Horse Artillery. The museum was attacked by the IRA on 25 August 1992 and extensive damage to the collection and to some of the Castle resulted. It re-opened in 1995.

How To Get To Shrewsbury Castle (Map):