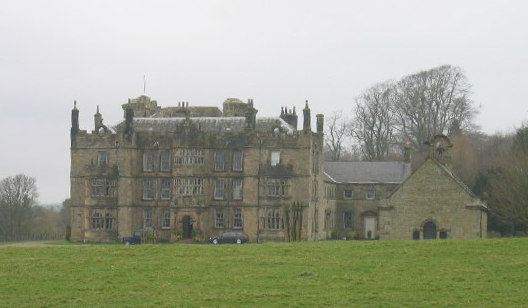 Location: Hexham, Northumberland, England.
Built: 14th century.
Condition: Intact.
Ownership / Access: Privately owned.The grounds are open to the public but the Castle is open to the public only in June.
Opening times: Check their website for more info.
Price of Admission: Check their website for more info.
Notes: Chipchase Castle is a 17th-century Jacobean mansion incorporating a substantial 14th century pele tower which stands north of Hadrian's Wall, near Wark on Tyne, between Bellingham and Hexham in Northumberland, England. It is a Scheduled Ancient Monument and a Grade I listed building. The Heron family acquired the Manor of Chipchase by the marriage of Walter Heron to the Chipchase heiress. He built a massive four storey battlemented tower house on the site of an earlier house in the mid-1300s. A survey in 1541 described a "fare tower" with a "manor of stone joined thereto" owned by John Heron. In 1621, Cuthbert Heron (High Sheriff of Northumberland in 1625) demolished the house and built a fine Jacobean mansion, leaving the tower standing and attached to the new house. His first son George was killed at the Battle of Marston Moor in 1644 in the service of Charles I. His second son Cuthbert was created a Baronet by Charles II, (See Heron Baronets), but he experienced financial problems which eventually led to the sale of the estate by the Herons early in the 18th century. John Reed a Newcastle upon Tyne banker bought the estate in 1734 and carried out major alterations to the castle including a classical facade to the old tower. The failure of Reed's family bank caused his descendants to sell the estate to the Greys of Backworth in 1821 to defray debts.

How To Get To Chipchase Castle (Map):