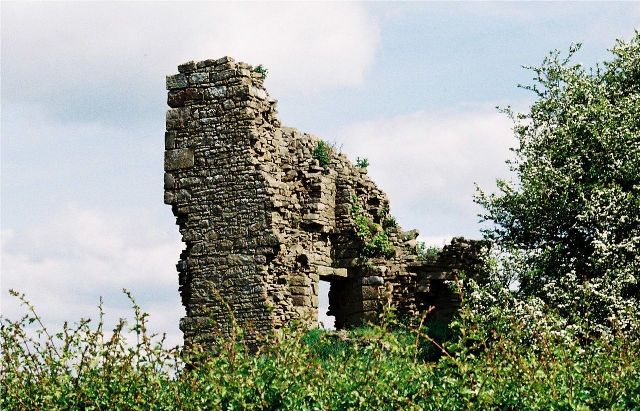 Location: Garstang, Lancashire, England.
Built: 1490.
Condition: Ruins.
Ownership / Access: Not open to public.
Notes: Greenhalgh Castle is a castle, now ruined, near the town of Garstang in Lancashire, England. Thomas Stanley, 1st Earl of Derby had the castle built in 1490 to provide defence for his estates around Garstang. The land on which the castle was built is said to be a gift to Stanley from his stepson Henry Tudor for his assistance in defeating Richard III at the Battle of Bosworth. The castle stood on a small area of raised ground, about 35 yards (32 m) square and was rectangular with towers 24 yards (22 m) square at each corner. It was constructed of rubble and sandstone with angle quoins. The entrance was to the east on higher ground and there was probably a moat in the lower ground surrounding the castle. During the English Civil War the castle was garrisoned by James Stanley, 7th Earl of Derby in support of Charles I. It was one of the last two Royalist strongholds in Lancashire to succumb following a bitter siege during 1644/45 by Oliver Cromwell's forces. The other was Lathom. The garrison at Greenhalgh Castle eventually surrendered in May 1645 provisional on their being granted safe conduct to return to their homes unharmed. Thereafter, demolition teams partially destroyed the castle to ensure that it could not be used again for military purposes. Following continued deterioration of the ruins, the only remain of the original four towers is the lower portion of one. Many of the local farmhouses, including the neighbouring Castle Farm which was built in the 17th century, have incorporated the stones from the castle ruins into their buildings.