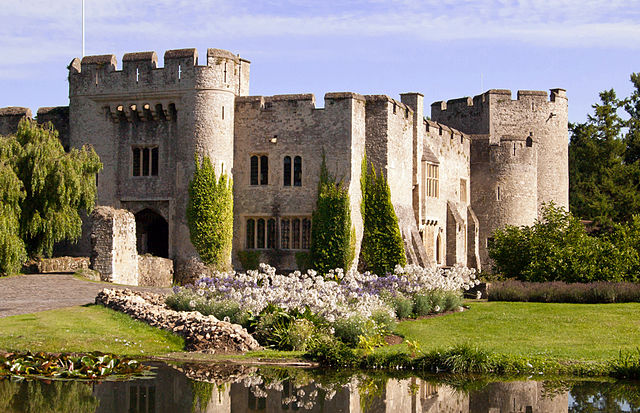 Location: Allington, Kent, England.
Built: 13th-14th century.
Condition: Restored.
Ownership / Access: Wedding venue.
Opening times: Check their website for more info.
Price of admission: Check their website for more info.
Notes: Allington Castle is a stone-built moated castle in Allington, Kent, just north of Maidstone, in England. The first castle on the site was an unauthorised fortification, built during The Anarchy of the early 12th century and torn down later in the century when royal control was reasserted. It was replaced by a manor house, which was fortified with royal permission in the 13th century. Various alterations and expansions were made by successive owners over the following two centuries. The property was developed into a fortified compound with six towers at irregular intervals along the curtain wall and domestic buildings in the interior, including one of the first long galleries built in England. In 1554 it was seized by the Crown in the course of dispossessing its owner, Sir Thomas Wyatt the Younger, after the failure of his rebellion against Queen Mary. The castle subsequently fell into a state of decay that was accelerated by damaging fires, neglect and vandalism, until it was largely ruined by the start of the 20th century. It was saved and restored by the efforts of Sir Martin Conway and his wife during the first half of the century. After nearly fifty years of occupation by a community of Carmelite friars and nuns, it returned to being a private residence in 1999 and is currently the home of Sir Robert Worcester, the founder of the MORI polling company. It is a grade I listed building and is used as a wedding venue, though there is no public access otherwise.