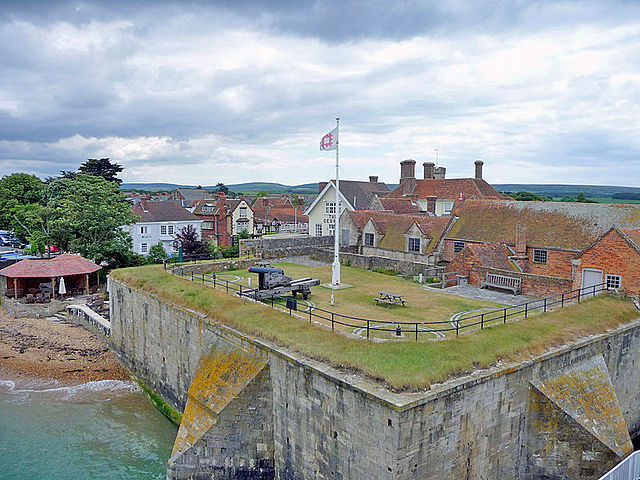 Location: Yarmouth, Isle of Wight, England.
Built: 1547.
Condition: Substantially intact.
Ownership / Access: English Heritage. Open to Public.
Opening times: Check their website for more info.
Price of admission: Check their website for more info.
Notes: Yarmouth Castle is a artillery fort built by Henry VIII in 1547 to protect Yarmouth harbour on the Isle of Wight from the threat of French attack. Just under 100 feet (30 m) across, the square castle was initially equipped with 15 artillery guns and a garrison of 20 men. It featured an Italianate "arrow-head" bastion on its landward side; this was very different in style from the earlier circular bastions used in the Device Forts built by Henry and was the first of its kind to be constructed in England. During the 16th and 17th centuries the castle continued to be maintained and modified; the seaward half of the castle was turned into a solid gun platform and additional accommodation was built for the fort's gunners. A bulwark was built on the west side of the castle and an additional gun battery was placed on the town's quay, just to the east. For most of the English Civil War of the 1640s it was held by Parliament; following the Restoration, it was refortified by Charles II in the 1670s. The fortification remained in use through the 18th and 19th centuries, albeit with a smaller garrison and fewer guns, until in 1885 these were finally withdrawn. After a short period as a coast guard signalling post, the castle was brought back into military use during the First and Second World Wars. In the 21st century it is operated by the heritage organisation English Heritage as a tourist attraction.

How To Get To Yarmouth Castle (Map):