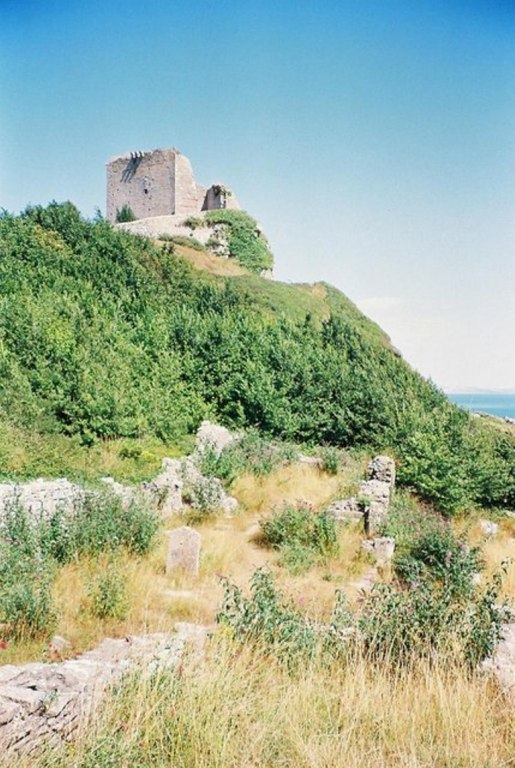 Location: Portland, Dorset, England.
Built: 15th century
Condition: Ruins.
Ownership / Access: Private.
Notes: Rufus Castle, also known as Bow and Arrow Castle, is a ruined castle overlooking Church Ope Cove on Portland, England. The castle dates from the late 15th century, on the site of an earlier building (with origins dating from 1142) - making it Portland's oldest castle. It is likely to have been named Rufus Castle as it was probably built by that king. Built directly off of the rock face, on a pinnacle of rock, the castle was positioned on the site of an earlier Saxon defence work. However much of the original castle has been lost to erosion and collapse over the years. The castle appears to have been the keep of a stronghold, the foundation of which was much above the top of the church tower of St. Andrews which lay in the valley below. The pentagonal tower of the castle has late Medieval gunholes, but rests uncomfortably on an earlier foundation to the north and stepped plinth to the west which may have been a 12th-century keep.In recent years the castle has become available for the public to view on certain dates during the peak season, but only the exterior. Remains include parts of the keep, outer bailey, sections of wall with gun ports and a 19th-century round-arched bridge across Church Ope Road. The castle, including its bridge, has been a Grade I listed building since January 1951. It is one of three buildings on Portland to be Grade I Listed. In addition to this, the castle has become a scheduled monument under the Ancient Monuments and Archaeological Areas Act 1979 as amended as it appears to the Secretary of State to be of national importance.

How To Get To Rufus Castle (Map):