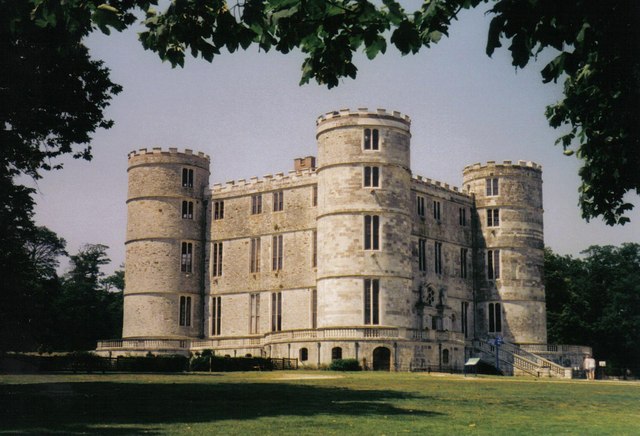 Location: East Lulworth, Dorset, England.
Built: c. 1610.
Condition: Restored.
Ownership / Access: English Heritage.
Opening Times: Check their website for more info.
Price of Admission: Not free. Check their website for more info.
Notes: Lulworth Castle, in East Lulworth, Dorset, England, situated south of Wool, is an early 17th-century mock castle. The stone building has now been re-built as a museum. The castle is surrounded by Lulworth Park and the Lulworth Estate.The foundations for Lulworth Castle were laid in 1588, and it was completed in 1609, supposedly designed by Inigo Jones. The castle was built as a hunting lodge by Thomas Howard, 3rd Viscount Howard of Bindon, a grandson of the 3rd Duke of Norfolk. In 1641, Humphrey Weld, a grandson of Humphrey Weld, purchased it from Howard's heir, Lord Howard de Walden. The castle was seized by the Roundheads during the English Civil War, who used it as a garrison. Weld regained the property after the war finished. A Roman Catholic Chapel was built in the grounds in 1786. Following the French Revolution, the surviving members of the French Royal Family were allowed to use Lulworth as one of their residences-in-exile. Charles X of France also stayed there briefly following the Revolution of July 1830. The castle was gutted by fire on 29 August 1929 and was left as a roofless ruin, the family building a new residence for themselves nearby. In the 1970s, restoration work began with the help of English Heritage. The restoration, finished in 1998, included a new roof and restored surviving walls in the interior, but no new internal walls or replacements for the destroyed upper floors were constructed. The castle is still owned by the Weld Family and is a tourist attraction, holding medieval-themed events. Part of the Lulworth Estate is in use as an MoD firing range as well as a wildlife conservation area.

How To Get To Lulworth Castle (Map):