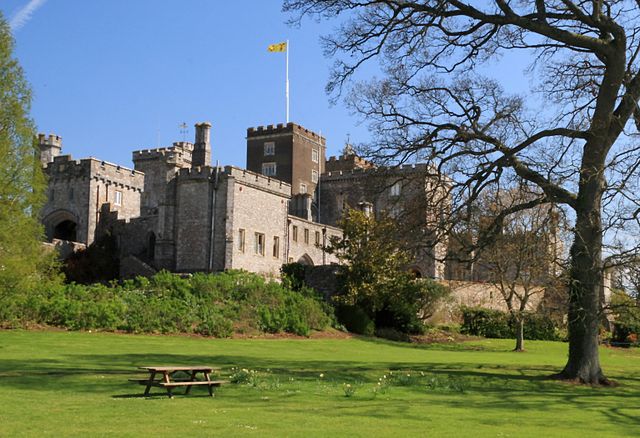 Location: Devon, England.
Built: 14th-16th century
Condition: Restored.
Ownership / Access: Earl of Devon. Historic House open to the public.
Opening times: Check their website for more info.Powderham Castle official website
Price of admission: Not free. Check their website for more info.Powderham Castle official website
Notes: Powderham Castle is a fortified manor house situated within the parish and former manor of Powderham, within the former hundred of Exminster, Devon, about 6 miles (9.7 km) south of the city of Exeter and 1⁄4 mile (0.4 km) north-east of the village of Kenton, where the main public entrance gates are located. It is situated on flat, formerly marshy ground on the west bank of the River Exe estuary where it is joined by its tributary the River Kenn. On the opposite side of the Exe is the small village of Lympstone. The castle was expanded and altered extensively in the 18th and 19th centuries, most notably by James Wyatt in the 1790s. The castle remains the seat of the Courtenay family, Earls of Devon.

How To Get To Powderham Castle (Map):