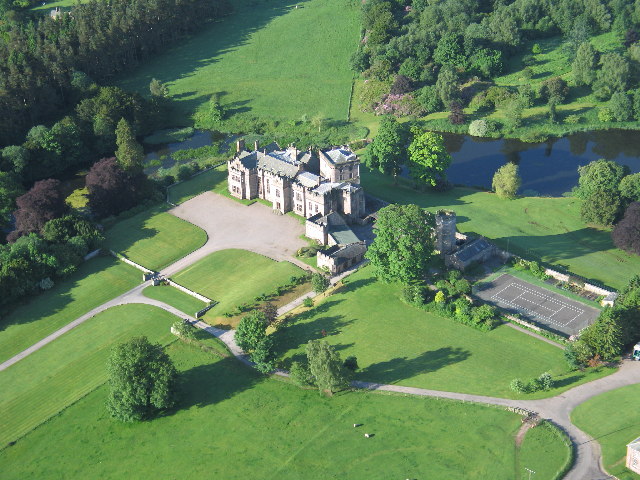 Location: Penrith, Cumbria, England.
Built: 14th-19th century
Condition: Rebuilt
Ownership / Access: The castle is not open to the public, but is used as a venue for corporate hospitality, outdoor management training, and is licensed for civil weddings..
Notes: Greystoke Castle is in the village of Greystoke 8 kilometres (5.0 mi) west of Penrith in the county of Cumbria in northern England. In 1069, after the Norman conquest the English landlord Ligulf de Greystoke was re-granted his land and he built a wooden tower surrounded by a pale (or pele). The first stone structure on the site was built in 1129 by Ivo, his grandson. The building grew to become a large pele tower and in the 14th century after William de Greystoke obtained a royal licence to castellate it, the castle was further enlarged. In 1571 the castle was in the ownership of Thomas Howard, 4th Duke of Norfolk and Earl Marshal of England through his marriage into the Dacre family, who had been the previous owners. The Howards were Catholics and Royalists and as a consequence during the Civil War the castle was laid waste by Parliamentarians under General Lambert in 1648. The castle was enlarged and altered in 1789. Then between 1838 and 1848 the castle was re-built to a design by Anthony Salvin, incorporating the older structures including the pele tower, and the estates were developed by Charles Howard into a modern farm. In 1868 the house caught fire and many treasures and works of art were lost. However, the castle was rebuilt under Henry Howard, again by Salvin. During the Second World War the castle and estate were requisitioned by the army as a tank drivers' training area. The castle itself became a prisoner of war camp. Consequently much damage was done to both the building and the estate during this period. In 1950 Stafford Howard inherited the estate and began a further period of restoration. It is now managed by his son, Neville.

How To Get To Greystoke Castle (Map):