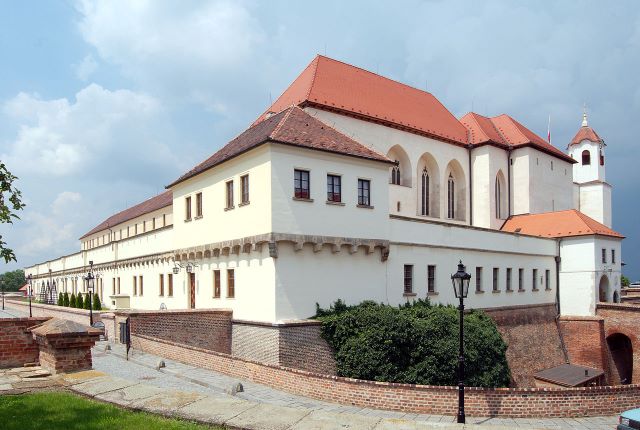 Location: Brno, Czech Republic.
Built: 13th century.
Condition: --
Ownership / Access: --
Notes: Špilberk Castle (German: Spielberg) is a castle on the hilltop in Brno, Southern Moravia. Its construction began as early as the first half of the 13th century by the Přemyslid kings and complete by King Ottokar II of Bohemia.[1] From a major royal castle established around the mid-13th century, and the seat of the Moravian margraves in the mid-14th century, it was gradually turned into a huge baroque fortress considered the harshest prison in the Austro-Hungarian empire, and then into barracks. This prison had always been part of the Špilberk fortress.In 1620, after losing The Battle of White Mountain on November 8, the leading Moravian members of the anti-Habsburg insurrection were imprisoned in Špilberk for several years. The town of Brno bought the castle in 1560 and made it into a municipal fortress. The bastion fortifications of Špilberk helped Brno to defend itself against Swedish raids during the Thirty Years' War, and then successful defence led to further fortification and the strengthening of the military function of the fortress. At the same time Špilberk was used as a prison. Protestants were the first prisoners forced to serve time here, followed later by participants in the revolutions of 1848–49, although hardened criminals, thieves and petty criminals were also kept here. Franz Freiherr von der Trenck, Austrian soldier and one of the most controversial persons of the period was also jailed and died here on October 4, 1749. Later, apart from several significant French revolutionaries captured during the coalition wars with France, Jean-Baptiste Drouet, famous as the former postmaster of Sainte-Menehould who had arrested King Louis XVI, was the most known of them all. A group of fifteen Hungarian Jacobins led by the writer Ferenc Kazinczy was also especially noteworthy.

How To Get To Špilberk Castle (Map):