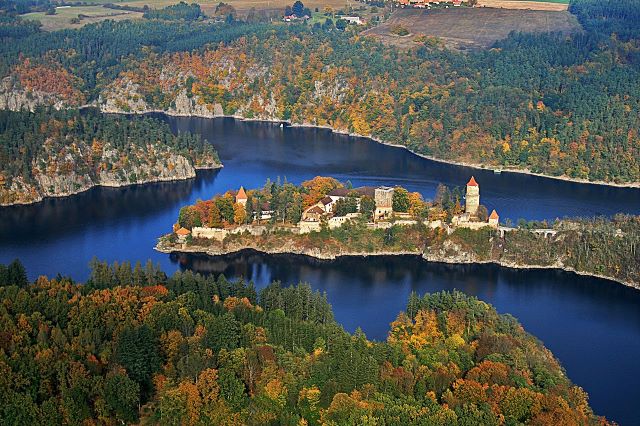 Location: Vltava, Czech Republic.
Built: 1234.
Condition: In good condition.
Ownership / Access: --
Notes: Zvíkov Castle (Czech: Hrad Zvíkov, German: Klingenberg), often called "the king of Czech castles", is a castle at the junction of the Vltava and Otava rivers, some 15 kilometres (9 mi) north of Písek, in the South Bohemian Region, Czech Republic, next to the village of Zvíkovské Podhradí. It stands on a difficult-to-access and steep promontory above the confluence of the Vltava and Otava rivers. The castle is one of the most important early-Gothic castles in Czech lands. The area was inhabited as early as prehistoric times, when the Celts built a fort here in the 1st century AD. The current castle was built in the first half of the 13th century, most probably on the orders of King Přemysl Otakar I, but the exact date is not known. The first written mention of the castle comes from year 1234 and owned by the Kings of Bohemia.The oldest part of Zvíkov is a massive prismatic residential tower named Hlízová with palace buildings built on its sides. During the reign of Ottokar II of Bohemia, a palace named Královský (King's Own) was built and this ground plan has been preserved until today. The new palace was built in lavish style and its parts were connected by monumental arcade. After 1473, Bohuslav of Svamberk commissioned mural decorations in the Chapel of St. Wenceslaus, which belongs to the masterpieces of early-gothic Czech architecture. The walls display the patron saints of Bohemia, the Virgin Mary the Protector, the Suffering Christ and the Martyrdom of St. Erasmus. The fortification was extended with Hláska, large 32-metre (105 ft) high tower (bergfrit) on the south side. The castle has two gates. The castle has its own ghost, Zvíkov's imp, and had inspired several painters and writers like the theatrical comedy Zvíkovský rarášek by Ladislav Stroupežnický. Today, Zvíkov (opened from Spring to Autumn) is hiking attraction and serves as a place of art exhibitions and stage plays.