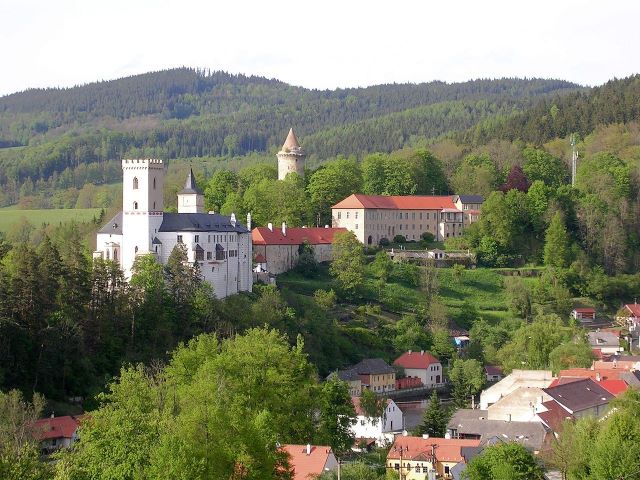 Location: South Bohemia, Czech Republic.
Built: 13th century.
Condition: Rebuilt.
Ownership / Access: --
Notes: Rožmberk Castle (German: original Rosenberg) is a castle situated in South Bohemia near Rožmberk nad Vltavou in the Czech Republic. Considered as one of the oldest castles in Bohemia, it stands on a promotory carved out on three sides by the river Vltava. It was first mentioned in 1253 in a document signed by Vok "von Rosenberg". It is regarded as the cradle of the House of Rožmberk, also known as the "Lords of the Rose", a historical Czech aristocratic family.The Rožmberk castle was founded in the first half of the 13th century either by Vítek the Younger of Prčice, or by his son Vok of Prčice, a member of the powerful Vítkovci family (Witikonides in Latin; Witigonen in German) who later styled himself Vok of Rožmberk (Vok de Rosenberch) after this castle. The original castle, known as Horní hrad (Upper Castle), consisted of a high tower known as the Jakobínka, 9.6 metres (31 ft) in diameter, with corbelled ramparts and a palace. The structure was completely surrounded by castle walls with a moat. Within a short time, a tributary town grew in the barbican. The castle became the administrative and economic centre of the family's lands, a part of which Vok gave to the newly established Cistercian monastery in Vyšší Brod. In 1302, when the cadet Krumlov branch of the Vítkovci died out, Vok's offspring inherited Český Krumlov and they settled there permanently. After 1330 Jindřich of Rožmberk built the Dolní hrad (Lower Castle), which was defended by ramparts placed above the moat, which was cut through the neck of the rock. In 1420 Oldřich II of Rožmberk (1403–1462), father of Perchta of Rožmberk, the White Lady, was forced to pawn the castle to the Lords of Walsee from Austria to get money to finance the army he was fielding against the Hussites. The loan was paid off, but in 1465 the castle was pawned again to the Lobkovic family. This loan too was paid off. The Starý (Horní) hrad (Old or Upper castle) burned down in 1522 and was never rebuilt.