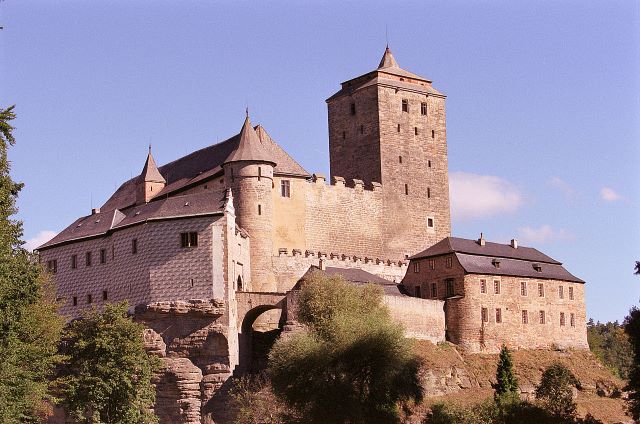 Location: Bohemian Paradise, Czech Republic.
Built: 1349 .
Condition: In good condition.
Ownership / Access: Kinský dal Borgo.
Notes: Kost Castle is located in the Jičín District of the Czech Republic. Kost Castle lies in Northern Bohemia, specifically the region Bohemian Paradise (Český Ráj) and is privately owned by Kinský dal Borgo noble family[1] It was first proposed by Beneš von Wartenberg in 1349 as a possible construction site and was completed by his son Peter von Wartenberg. It retains most of the original features and is overall very well preserved and maintained. The castle is known for its so-called "White tower" (Bílá Věž). In about 1414 the family of Zajíc von Hasenburg moved there; later the family of Schellenberg (1497–1524), Lobkowicz (till 1576) and others; in this time some more buildings were built near the castle and joined to it. Unlike most other castles in Bohemia, it does not lie on a hill, but on a spit between two brooks. Another peculiarity is the tower, which has a trapezoid-like ground-plan. The trapezoidal tower has the corners facing the areas of most likely catapult attacks. This is to make the missiles glance off the tower walls instead of hitting it headon thereby minimizing the damage.