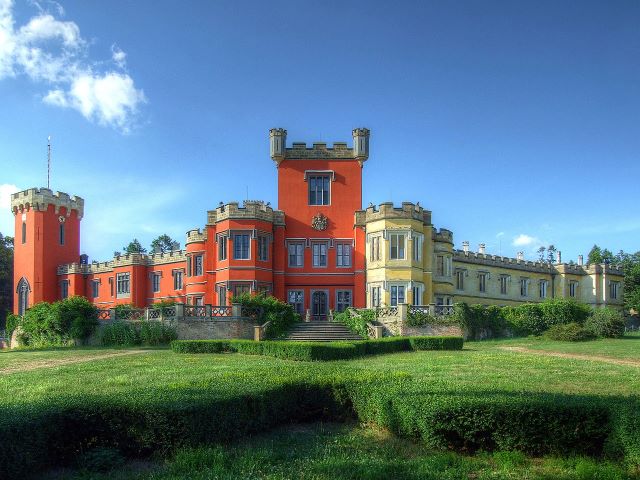 Location: Hrádek, Czech Republic.
Built: between 1839 and 1857.
Condition: In good condition.
Ownership / Access: --
Notes: Hrádek u Nechanic is a 19th-century Gothic style Romantic château near the town of Hrádek in the Hradec Králové Region of the Czech Republic. In 2001 Hrádek u Nechanic was declared part of the National Cultural Heritage. The chateau is administered by the National Heritage Trust and the Ministry of Culture.Hrádek u Nechanic was built between 1839 and 1857 as a representative and summer seat by Count František Arnošt of Harach, one of the most important representatives of the Jilemnice dynasty. The young Austrian architect Karl Fischer led building operations and suggested decoration of the chateau's interior. The chateau was designed by the English architect Edward Buckton Lamb. It is referred to as “Little Hluboká” because it resembles to Hluboka Chateau in southern Bohemia. Most of the furniture was made by local artisans. The remainder of the interior was brought from Italy and Austria. Around the same time, L. Krüger converted part of the local forest into a park. In the left part of the park, a reserve and pheasantry were founded. In 1945, the chateau was confiscated because of the Beneš decrees.

Hrádek u Nechanic On Wikipedia