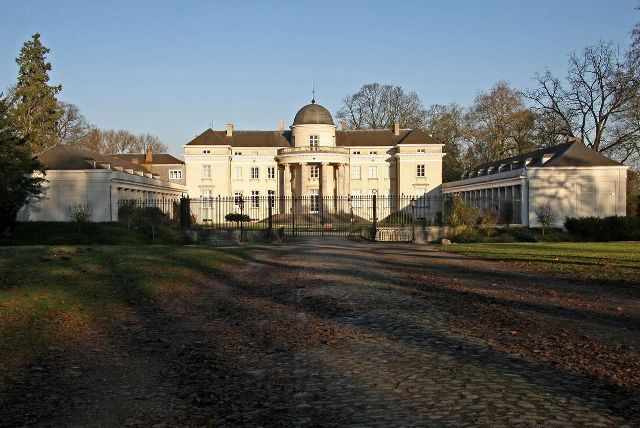 Location: Sint-Truiden, Belgium.
Built: 1787-1789.
Condition: Rebuilt
Ownership / Access: Count Charles d'Outremont.
Notes: The Castle of Duras in Duras, part of the Belgian city of Sint-Truiden is built in the Classical style . This Belgian castle was built between 1787 and 1789 and is located in a beautiful area. The castle was built on the location of the original castle of the Counts of Duras, which was built in 1102. The castle grounds cover an area of more than 100 ha, consisting of woods, meadows, fields and orchards. It also includes a watermill and a farm. It is now a protected monument. In 1902 the castle was almost completely destroyed by a fire, but was immediately rebuilt. During World War II the castle was surprisingly not seized by German troops. At the end of the war, in the year 1945, the castle was deliberately hit by a German V1 rocket. Many rooms were badly damaged because of that attack. Between 1960 and 1962 the castle was completely restored with the support of the Belgian State and the Count of Liederkercke. Earlier, in 1948, the castle was already declared as a protected monument. Count Jean-Joseph van der Noot married Florence Ruys Scheeren, Countess of Elissem near Landen. One of their children, Louise, got married on April 27, 1803 to Prince Louis de Ligne, son of Charles-Joseph, 7th Prince of Ligne and Princess Franziska of the house of Liechtenstein. They had three children including a son, Eugène, 8th Prince of Ligne (1804–1880), who was a distinguished Belgian statesman. After the death of her husband in 1813, Louise married Count Charles d'Outremont, whose family still in possession of the castle. Several times a year the castle can be visited by the public, and it can be rented for weddings.