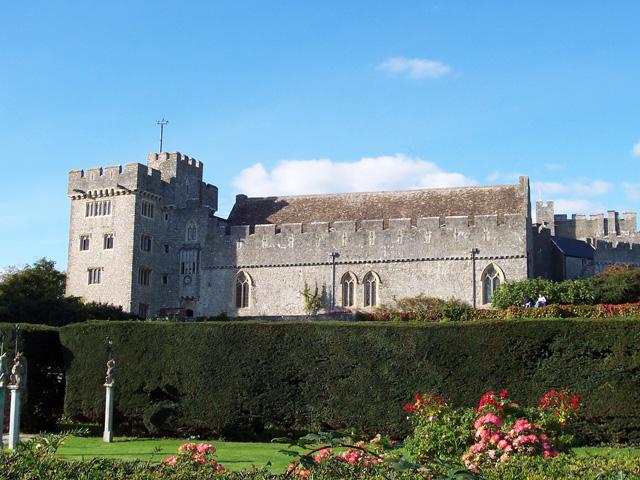 Location: Vale of Glamorgan, Wales.
Built: 12th century.
Condition: Intact.
Ownership / Access: Atlantic College.
Notes: St Donat's Castle is a medieval castle in the Vale of Glamorgan, Wales, overlooking the Bristol Channel in the village of St Donat's near Llantwit Major, and about 25 km west of Cardiff. Since 1962 the castle has housed an international secondary school called Atlantic College. The castle lies on an elevation to the east of a small valley opening to the sea between precipitous sea cliffs to both east and west. An inner court about 40 m across within a polygonal inner curtain wall is closely surrounded by an outer court and curtain wall with a dry moat facing the eastern approach. The curtain walls date from c. 1300, having been built by the founder of the Stradling family (or perhaps by his widow's second husband). The outer wall mostly survives and has a small original tower entirely contained with it on the north, and a square gatehouse on the east. The inner court is entered by an arch on the east side beside the rectangular Mansell Tower (an enlargement of the original keep). The north-western range is of the early 16th century; the north-eastern range is of the late 15th century; the late-15th-century great hall is on the south side of the court. Beside it, squeezed in between the inner and outer curtain walls, is the Bradenstoke Hall, consisting of the inner curtain wall on the north side, the somewhat realigned outer curtain wall on the south, with a modern wall on the east end built at the point so that an early-14th-century roof (brought from Bradenstoke Abbey in Wiltshire) would fit. The western range has largely been replaced by a much larger, three-storey building (which necessitated, when erected, the demolition of the western part of the outer curtain wall). Its ground floor is a large modern dining hall with a very fine 15th-century roof, probably Flemish in origin but imported from Boston Stump Church (Lincolnshire). The Lady Anne Tower on the south-western corner of the castle has been rebuilt many times.The castle now houses Atlantic College, an international Sixth Form College founded in 1962 as the first of the thirteen United World Colleges.Within the castle grounds lies St Donat's Arts Centre, housed in a 14th-century tithe barn which has been converted to a professionally equipped theatre, together with a contrasting new addition of the Glass Room. This offers views across the sea towards Exmoor. The centre provides a programme of cinema, exhibitions, festivals and live shows.

How To Get To St Donat's Castle (Map):