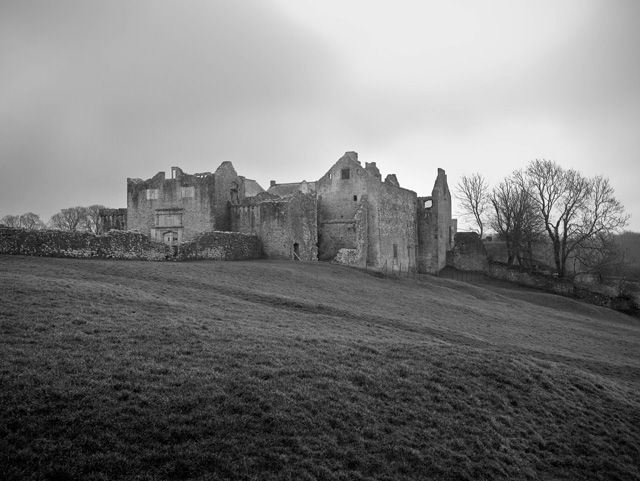 Location: Cowbridge, Wales.
Built: circa 1300.
Condition: Ruined
Ownership / Access: Cadw.
Notes: Old Beaupre Castle (also known as Beaupre Castle, Old Beaupre Manor, or simply Beaupre) is a ruined medieval fortified manor house located in the community of Llanfair, outside Cowbridge in Wales presently under the care of Cadw. It is known in historic documents under the names Beawpire, Bewerpere, Bewpyr and Y Bewpur. Although called Old Beupre Castle the structure is seen as a fortified manor house. The original house was an L-shaped building, now located within the inner courtyard, built circa 1300 and from this period until the 18th century it was owned by the Basset family. During the 16th century intensive remodeling was undertaken, started by Sir Rice Mansel, continued by William Basset and completed by William's son, Richard. This additional work added the impressive outer gatehouse, completed in 1586 and a storyed Renaissance porch, completed 1600, along with the buildings around the middle court. Beaupre Castle has few outwardly looking windows and appears like a series of fortified barns. The main entrance is via the gatehouse reached via a low walled outer courtyard. The gatehouse is a three storey structure surrounded by a curtain wall. The inner porch stands out from the rest of the courtyard with smooth ashlar stonework in comparison to the rough local stonework surrounding it. The porch, designed by Richard Twrch,[1] consists of varying architectural styles including a Tudor arch, strapwork decoration and three tiers of flanked columns. The columns rise in ascending order from Doric to Ionic to Corinthian and the second tier bears the Basset family heraldic set on panels. After the 16th century alterations little work was carried out on Beaupre, and after the English Civil War the Basset family fortunes went into decline and in the early 18th century the Basset inheritance eventually passed to the Jones family.[2] The Jones family decided not to settle in Beaupre Castle and chose to use the mansion of New Beaupre.

How To Get To Old Beaupre Castle (Map):