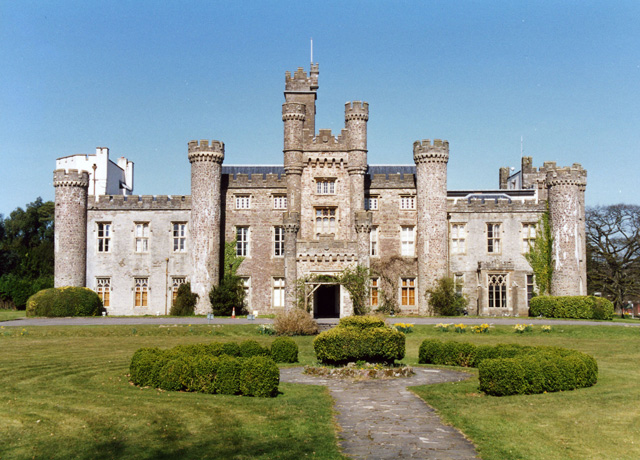 Location: Vale of Glamorgan, Wales.
Built: 1419.
Condition: Intact.
Ownership / Access: --
Notes: Hensol Castle (previously Hensol House) is a castellated mansion in the gothic architecture style dating from the late 17th century or early 18th century, now a wedding and conference venue for The Vale Resort. It is located north of Clawdd Coch and Tredodridge in the parish of Pendoylan (Welsh: Pendeulwyn) in the Vale of Glamorgan, Wales. It is a Grade 1 listed building.Hensol hospital was opened in July 1930 as a "colony" for 100 men with learning disabilities ("mental defectives" in the terminology of the time). New blocks were built in the grounds in 1935 to accommodate up to 460 men, women and children and in 1937 it was visited by Sir Kingsley Wood, Minister of Health. At that time it housed 343 inmates and the Minister was reported a saying that he hoped to take back to his work in London fresh ideas which one could never obtain from minutes and records. Further building and expansion took place with the advent of the National Health Service in 1948. Latterly in the 20th century, with the move towards community care for people with learning disabilities, the number of patients progressively decreased. In the 1980s the ground floor of the house became a conference centre and, from 1992 to 2002, the upper two stories housed the Wales School of Occupational Therapy. The hospital closed in 2003 and the castle and grounds were bought by local businessman and supporter of sport in Wales, Gerald Leeke, chairman of the Leekes group of companies who had previously built the 145-bed Vale of Glamorgan Hotel, Golf and Spa Resort on adjacent land. Some of the old hospital buildings have been converted in luxury apartments. Hensol Castle was used to film scenes of Whitehall in the 1992 movie Rebecca's Daughters and scenes set in 10 Downing Street for the BBC television Doctor Who episode "Aliens of London". Rumours abound that the castle is haunted. Workers of the Centre for Health Leadership Wales, who used the castle as their Headquarters before it was sold in 2003, often reported feeling a "presence," especially in the attic storage area in the upper levels (that were eventually cordoned off due to Health and Safety issues). The said attic areas were often strewn with the bodies of dead birds that had found their way into the space but were unable to find their way out. This only served to support the rumours that a ghost lived in the attic.

How To Get To Hensol Castle (Map):