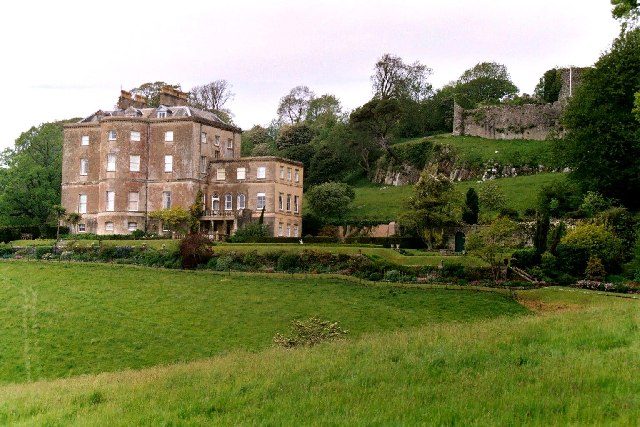 Location: Penrice, Swansea, Wales.
Built: 13th century.
Condition: Intact
Ownership / Access: Methuen-Campbell family.
Notes: Penrice Castle is the 13th century successor to a strong ringwork to the southeast, known as the Mountybank. It was built by the de Penrice family who were originally given land at Penrice for their part in the Norman conquest of Gower. The last de Penrice married a Mansel in 1410 and so the castle and its lands passed to the Mansel family. The Mansels later bought Margam Abbey, which they made their main seat while retaining their Gower lands. In the 17th century the castle was damaged in the English civil war. The stone castle is a large, very irregular hexagon with a round keep on the west side, to which were attached two other towers and a partial mantlet or chemise wall. At the northwest corner is a twin square towered gatehouse with another tower in the interior. The ground falls away steeply on the north, east, south and southwest sides, where there are various other turrets, though not very scientifically disposed. The whole structure is now in a dangerous condition, but the south wall can be seen from the footpath that runs past the 18th-century mansion on the estate (51.5742°N 4.1707°W), immediately to the south. The mansion, built in the 1770s by the neo-classical architect Anthony Keck for Thomas Mansel Talbot (1747-1813) of Margam and Penrice, is itself Grade I listed and one of the finest country houses in Wales. The surrounding park is also Grade I listed and was laid out by William Emes, a student of Capability Brown, in c. 1773-76, while the mansion was built. The mansion was built to house Thomas Mansel Talbot's collection of antiquities and works of art. He visited Italy between 1769 and 1773 and bought antiquities from Thomas Jenkins, Gavin Hamilton and Giambattista Piranesi, which included a Minerva with bronze helmet and a funerary monument (now in the Courtauld Institute, London). He also bought modern furniture by Albacini and Valadier, and contemporary sculpture by Johan Tobias Sergel and commissioned busts of himself and Pope Clement XIV from Christopher Hewetson (the latter is now in the Victoria and Albert Museum, London), as well as acquiring paintings by Rembrandt and Hackert and drawings by Poussin. His collections were shipped from Italy in 1772 and 1775 and put on display after his marriage in 1792. A large part of the collection was later transferred to Margam Castle and was sold at auction in 1941. Information about the Penrice household and family in 1799-1806 and after appears in the published diaries and correspondence of the Scottish-born governess Agnes Porter. The mansion is now lived in by the Methuen-Campbell family, who are direct descendants of the de Penrice family.