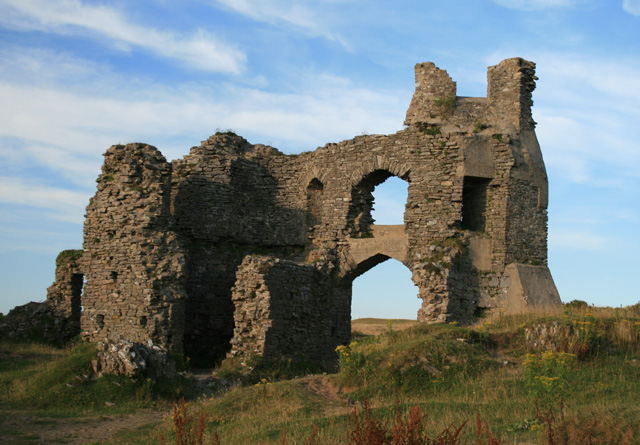 Location: Gower Peninsula, Wales.
Built: 12th century
Condition: Ruin.
Ownership / Access: --
Notes: The castle was established from the 12th century, likely commissioned by Henry de Beaumont, 1st Earl of Warwick, after being granted the Lordship of Gower. The castle is believed to have been built as a ringwork castle with wooden palisades but subsequently rebuilt in locally quarried limestone and reddish sandstone during the late 13th or early 14th century probably by de Braoses who held the castle for part of the 13th century. The castle consisted of a curtain wall surrounding a central courtyard and featured a twin towered gatehouse, a small semi-circular turret and a square tower. A singular entrance on the eastside consisting of an archway between two half-round towers with square inner sides permitted access. Despite these features there is evidence of little understanding of military architecture and amateurish execution of some of the castle's features such as ineffective arrow-slits. The castle was vulnerable to sandblow and sand dune encroachment led to its abandonment by 1400. Today only ruins of the castle remain including parts of the Norman stone hall, tower, gatehouse and curtain wall survive as ruins.

How To Get To Pennard Castle (Map):