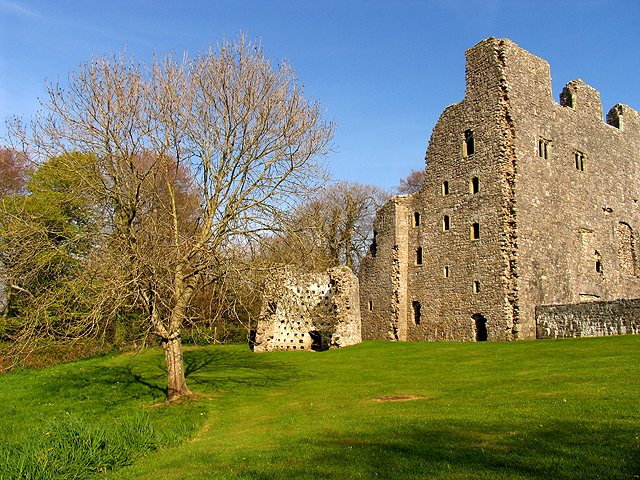 Location: Oxwich Bay on the Gower Peninsula, Wales.
Built: 16th century.
Condition: Ruin.
Ownership / Access: Cadw.
Notes: Oxwich Castle occupies a position on a wooded headland overlooking Oxwich Bay on the Gower Peninsula, Wales, UK. Although it may occupy the site of an earlier fortification, this is a castle in name only as it is a grand Tudor fortified manor house built in courtyard style. A product of the peaceful 16th century, Oxwich was built by Sir Rice Mansel to provide sumptuous accommodation. He gave it a mock military gateway complete with family coat of arms. Sir Rice's work was confined to the southern block and was completed between the 1520s and 30s. On Mansel's death his son, Sir Edward Mansel succeeded to the property and between 1560-80 created the much grander style multi-storeyed range which contained an impressive hall and elegant long gallery - a fashionable Elizabethan architecture feature. It was a leading example in Wales of the Elizabethan prodigy house. The six-storey south-east tower which still survives probably accommodated the family and servants. After the Mansels moved out in the 1630s the castle fell into disrepair and the south range was used as a farmhouse. The building is now in the care of Cadw.

How To Get To Oxwich Castle (Map):