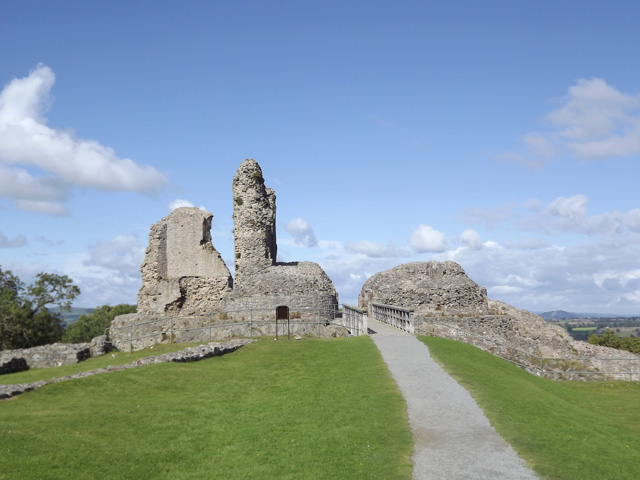 Location: Montgomery in Powys, Mid Wales.
Built: 1071 and 1074.
Condition: Ruined
Ownership / Access: --
Notes: Montgomery Castle is a stone masonry castle looking over the town of Montgomery in Powys, Mid Wales. It is one of many Norman castles on the border between Wales and England. The original motte and bailey is now known as Hen Domen and was built at the order of Roger de Montgomery, Earl of Shrewsbury, sometime between 1071 and 1074. On the rebellion of his son Robert of Belleme in 1102, the castle was given to Baldwin de Boulers. It is from Baldwin that Montgomery gets its Welsh name, Trefaldwyn (Baldwin's town). The de Boulers (later known as Bowdler) family held the castle until 1215, when the fortress was destroyed by Prince Llywelyn ab Iorwerth. The motte and bailey was subsequently refortified as an outpost for the new stone castle and probably survived until around 1300. There are permanent exhibitions relating to the medieval Hen Domen and Norman Montgomery Castles and their archaeological excavations with scale models of both in The Old Bell Museum, Montgomery, Powys.

How To Get To Montgomery Castle (Map):