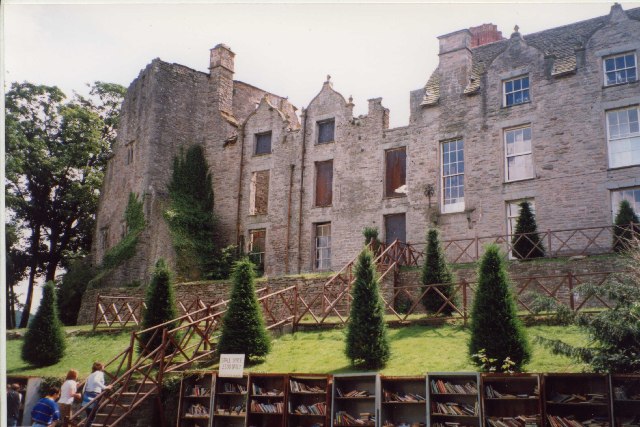 Location: Powys, Mid Wales.
Built: 1070.
Condition: Ruins.
Ownership / Access: Now used for second-hand bookselling.
Notes: The main fortress within Hay-on-Wye was situated on the great site commanding the town and river under the current ruins of the castle and mansion. This was undoubtedly the 'castello de haia' handed to Miles of Gloucester, 1st Earl of Hereford, in 1121 with Sibyl de Neufmarche, the daughter of Bernard de Neufmarche. It is most likely that the keep stood by this time. It is therefore possible that this is the oldest Norman tower in Wales, dating to the onslaught of William Fitz Osbern in 1070. During the anarchy (1136-54) in the reign of King Stephen a series of charters were passed by the Gloucesters concerning the castle. In 1165 the last of Miles of Gloucester's male descendants was killed at nearby Bronllys Castle and Hay-on-Wye Castle passed into the hands of William de Braose, 3rd Lord of Bramber and of New Radnor and Buellt. The de Braose dynasty were energetic lords and probably built the core of the gatehouse which now stands besides the keep. In the summer of 1198 a major English army formed here before marching off to victory at the Battle of Painscastle some four miles to the north. In 1230 the last de Braose of Brecon, William de Braose was hanged by Prince Llywelyn ab Iorwerth and Brecon lordship with Hay-on-Wye passed into the hands of the de Bohuns. Taking advantage of this in 1231, Prince Llywelyn ravaged the lands of his de Bohun in-laws during which Hay-on-Wye town was burnt, although the castle survived the onslaught. The castle saw service in the Barons' War of 1263 to 1266, changing hands three times, once being surrendered to the great Simon de Montfort, 6th Earl of Leicester. With the conquest of Wales by King Edward I Longshanks life became more peaceful in this Marcher town. Around 1401 both town and castle suffered damage by the forces of Owain Glyndwr, although the castle was listed as defensible against the Welsh in 1403. The fortress later passed to the earls of Stafford, who were to become the unlucky dukes of Buckingham during the Wars of the Roses. The castle was repaired during the conflicts of the 1460s, although its military use would have been somewhat dubious against cannon. In the 1660s, James Boyle of Hereford built a new mansion on the north side of the castle, and most of the curtain wall was demolished to improve the views. The mansion is now used for second-hand bookselling. The keep is roughly thirty feet (9 m) square, and once had four storeys. The corners of the tower have been much rebuilt, probably due to insecure foundations. The entire south east corner of the tower has been replaced and it is possible that when first constructed there was a spiral stair here to allow access to the upper floors. This tower is similar to the keep found at Goodrich Castle. Some time in the 12th century the strong curtain wall with gate was added to the site. This gateway is one of the finest carved castle gateways in Wales and is comparable with the much more ornate work at Newcastle near Bridgend. The two gates hanging within the gateway, although of different ages, would appear to be very old - the gates at Chepstow Castle have been dendrochronologically dated to the reign of King Henry II (1154-89). Probably during the troubles of the Barons' War a small tower was added in front of the gateway to make a proper gatehouse complete with portcullis. The portcullis mechanism mounted on the wall walk was reached via a flight of steps up over the back of the gate passageway, which also allowed access to the wall walks.

How To Get To Hay Castle (Map):