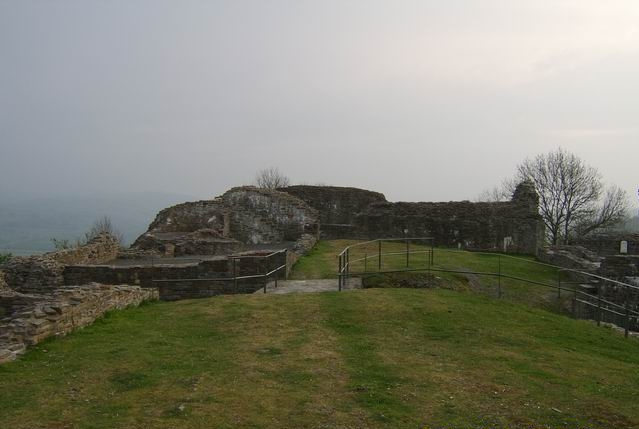 Location: Abermule, Powys. Wales.
Built: 1273 - 1277.
Condition: Ruined
Ownership / Access: Cadw.
Notes: Dolforwyn Castle (Welsh: Castell Dolforwyn) is a Welsh medieval castle above the village of Abermule, Powys. The fortification was established by Llywelyn ap Gruffudd, Prince of Gwynedd in the late 13th century. It is sited on a wooded ridge commanding excellent views of the upper Severn Valley. Dolforwyn Castle is a fine example of Welsh castle design as opposed to those built by the English during their conquests of Wales. Dolforwyn appears to have been occupied until the reign of Richard II (1377-99), but by 1381 it was already described as being in poor repair, and in 1398 it was described as being "ruinous and worth nothing." It appears that after this date the castle was almost lost from memory and attracted little interest. The ownership of the castle passed to the Earls of Powis and was subsequently bought by the grandfather of the antiquarian John Davies Knatchbull Lloyd, who gave the site to the Welsh Ancient Monuments Board (now Cadw) in 1955. Cadw arranged for excavation of the site between 1981 and 2002 and the monument is now open to the public. In June 2009 Cadw commenced a 6-month process of consolidation of the castle masonry.

How To Get To Dolforwyn Castle (Map):