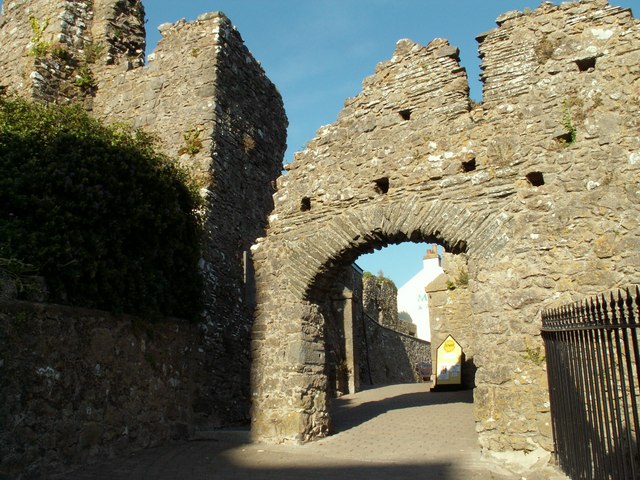 Location: Tenby, Pembrokeshire, Wales.
Built: 1153.
Condition: Ruin.
Ownership / Access: --
Notes: The castle, which was sited on a rocky promontory, was founded by the Normans during their invasion of West Wales in the 12th century. A stone tower was built on the headland's highest point which was protected by a curtain wall. The walls had a gateway and several small towers on the landward side. A lesser sea wall surrounded the remainder of the site and the beach area to the west. In 1153, the castle was captured and destroyed by Maredudd ap Gruffydd and Rhys ap Gruffydd, the future ruler of the south-western petty kingdom of Deheubarth in mid Wales. The castle was besieged again by the Welsh in 1187. Although Llywelyn ap Gruffudd sacked the town during his campaign to retake South Wales in 1260, the castle was not captured. In the late 13th century, the castle and the town had become part of the feudal lands of William de Valence, 1st Earl of Pembroke. The French knight, who had been given the peerage for his military services for Henry III in the Second Barons' War, instigated the building of stone walls around the town. However the work meant that the defensive role of Tenby Castle was compromised. By the end of the 13th century, the town walls around the old town of Tenby were mostly completed although improvements continued. In 1328, a D-shaped barbican was added to defend the main gate into the town. Further D-shaped towers were also added to the northern and southern parts of the town walls. By the end of the 14th century, Tenby castle is thought to have been largely abandoned as a defensive fortification and in disrepair. In 1457, Jasper Tudor agreed to split the costs with the town's merchants to refurbish and improve Tenby's defences. The dry ditch along the outside the town walls was widened to 30 feet (9.1 m). Furthermore, the walls were heightened with the inclusion of a second tier of higher arrow slits behind a new parapet walk. Additional turret towers were added to the ends of the walls where they abutted the cliff edges. In the mid 16th century, another large D-shaped tower ("Five Arches") was built following fears about a second Spanish Armada. In 1648 during the Second English Civil War, a unit of Royalists under the command of Rice Powell held Tenby Castle for 10 weeks until they were starved into surrendering by Parliamentarian forces. A few features of the medieval castle remain. A path from Tenby harbour to the top of Castle Hill passes through the main square gateway. From the summit of the promontory is a small tower. A circular walk which was laid out in the 19th century follows the line of the original curtain walls. Tenby Museum & Art Gallery is built on the remains of the castle's domestic building, probably the great hall. Although the north gate has been demolished to widen the road, Tenby town walls on the north side are largely complete. The eastern walls and towers remain intact.