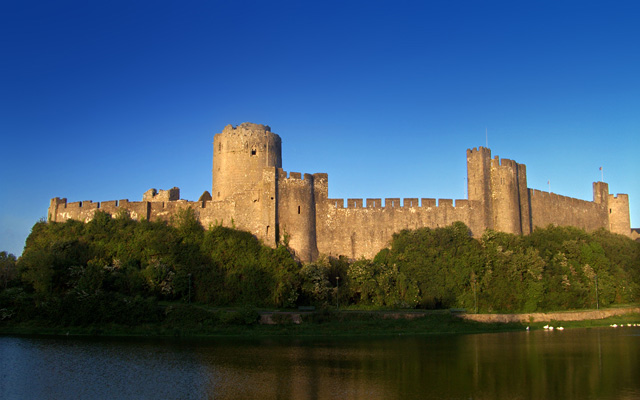 Location: Pembrokeshire, Pembroke, Wales.
Built: 1093.
Condition: Partially restored.
Ownership / Access: Philipps Family.
Opening Times: Check their website for more info.
Price of Admission: Check their website for more info.
Notes: Pembroke Castle (Welsh: Castell Penfro) is a medieval castle in Pembroke, West Wales. Standing beside the River Cleddau, it underwent major restoration work in the early 20th century. The castle was the original seat of the Earldom of Pembroke. In 1093 Roger of Montgomery built the first castle at the site when he fortified the promontory during the Norman invasion of Wales. A century later this castle was given to William Marshal by Richard I. Marshall, who would become one of the most powerful men in 12th-Century Britain, rebuilt Pembroke in stone creating most of the structure that remains today.Pembroke castle has been a Grade I listed building since 1951. The castle is open to the public. It remains the largest privately owned castle in Wales. Tableaux and displays depict the many highlights in its history. In 1976 Pembroke Castle was used for the jousting scenes in the film Jabberwocky, directed by Terry Gilliam. In 1989, the BBC used Pembroke Castle as the set of King Miraz's castle in its adaptation of Prince Caspian, one of C.S. Lewis's Chronicles of Narnia. In 2011, Pembroke Castle was used for some scenes of Richard II shown as part of the BBC's Shakespeare season The Hollow Crown. Pembroke appeared one of the opening scenes in The Lion in Winter, in which the future Richard I of England (Anthony Hopkins) jousts with another knight.

How To Get To Pembroke Castle (Map):