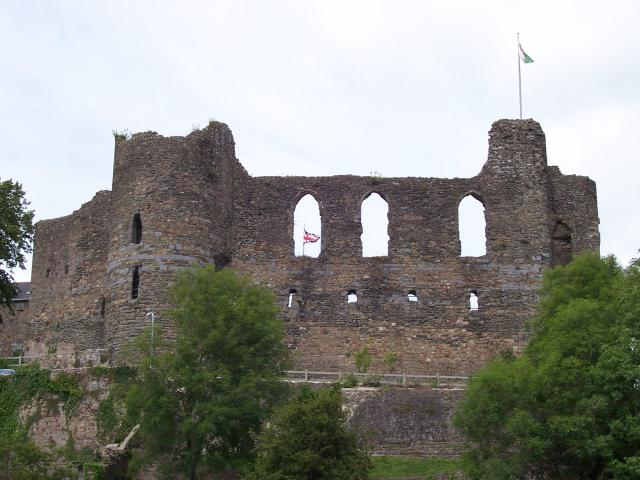 Location: Haverfordwest, Pembrokeshire, south Wales.
Built: 1120-1290.
Condition: Partially restored,
Ownership / Access: Pembrokeshire Coast National Park Authority.
Notes: Haverfordwest Castle is a castle located in the town centre at Haverfordwest, Pembrokeshire, south Wales, located in a naturally defensive position at the end of a strong, isolated ridge. The castle was established during Norman times in 1120 but much of the architecture remaining today is dated to 1290. For centuries the castle was an English stronghold. There are several other notable castles in area; Wiston Castle lies 6 miles (9.7 km) to the northeast and Pembroke Castle lies 12 miles (19 km) to the south.The derelict medieval castle was converted to a prison in 1779, although Giraldus Cambrensis records that part of the castle was used as a prison as early as 1188. In 1820 a new prison building was erected within the castle grounds, mainly within the inner bailey. It had a capacity for 86 prisoners. In 1878 the remaining inmates were transferred to the gaol in Carmarthen.[8] The building has subsequently been used as a police station and council offices. Today it houses the Pembrokeshire Record Office.[6] A cell door, leg irons, the original lock from the castle gate and numerous artifacts are on display. Today the castle is operated by the Pembrokeshire Coast National Park Authority and is open to the public. In 2010 there were plans to put the prison building on the market, with new council offices being built in the Prendergast area of Haverfordwest. In January 2008 an extensive archaeological excavation was conducted at Haverfordwest Castle.